Horses of God 2012 with English Subtitles

A fictional account of the lives of the men responsible for the suicide bombings in Casablanca in 2003.

The terrorist bombings in the Moroccan city of Casablanca didn’t get as much attention as those in New York, London or Madrid. The five attacks were aimed at western and Jewish targets, killed 45 people, and were carried out by Moroccans, all of them young men from Sidi Moumen, a nearby slum. The attacks came as a shock, because for an Arab country, Morocco is considered rather moderate and open-minded. So why did these young terrorists carry out such gruesome attacks in their own city?

The film ‘Le chevaux de Dieu’ (God’s Horses) tries to answer that question, and does it in an impressive way. For the most part, the film shows the daily life of young men in the slums. It is a cruel environment, an urban jungle full of violence, drugs, alcohol, corruption and extortion. And above all: without any hope. It is this desperate life that provides the fertile ground for frustration and rebellion.

The film shows clearly that the young men at no point deliberately choose for Muslim fundamentalism. One of them is arrested for throwing a stone to a police car and returns from prison as a faithful Muslim. Another kills his boss to prevent a rape, and is told by the religious community that God forgives him, provided that he starts praying and believing in Allah.

For the young slum dwellers, faith and religion is a tempting way of life. It preaches forgiveness, whereas the slum is full of violence. It is clear and deliberate, not chaotic like slum life. Its most important feature is discipline, which is in stark contrast with the loose morals in the slum dwellings.

The young men are fascinated by the Muslim organization. Slowly their lives are getting controlled by it. When the leader tells them they are selected for a special assignment, they feel honoured. Even when it becomes clear what this assignment is, most of them don’t hesitate for a second.

The film doesn’t approve of Muslim fundamentalism in any way. It merely shows the mechanics of it. That’s why it is such a good movie. Watching the young men being absorbed by their religion, you almost pity them. But most of all, you understand why they do what they do. That’s more than most other post-9/11 films have accomplished.

Moreover, the acting is incredibly subtle, and the cinematography is so effective that, at the end of the film you think you know the Sidi Moumen neighbourhood really well. When you go watch the movie, pay attention to the last shot; it is a beauty. In an amazing traveling shot, the camera circles around a group of kids playing football in the slums and watching the fatal explosion in the distance. Then, without cutting, the camera pans towards a cliff, we see the ball falling down and disappearing in the darkness. ‘Le chevaux de Dieu’ is a gem, and it would be a pity if it stays unnoticed by western audiences. 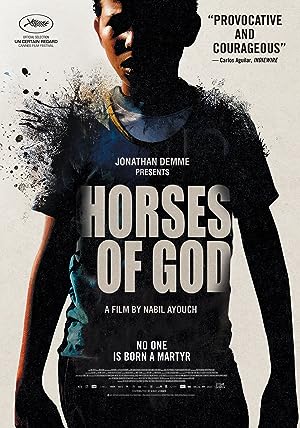