Home » Non-English with Subtitles » La lengua de las mariposas 1999 with English Subtitles
View cart “Before I Love You 2019” has been added to your cart.

For Moncho, it’s an idyllic year: he starts school, he has a wonderful teacher, he makes a friend in Roque, he begins to figure out some of the mysteries of Eros, and, with his older brother, a budding saxophone player, he makes a trip with the band from their town in Galicia. But it’s also the year that the Spanish Republic comes under fire from Fascist rebels. Moncho’s father is a Republican as is the aging teacher, Don Gregorio. As sides are drawn and power falls clearly to one side, the forces of fear, violence, and betrayal alter profoundly what should be the pleasure of coming of age.

Adapted by screenwriter Rafael Azcona from three stories in Manuel Rivas novel “Que Me Quieres, Amor”, Butterfly is a rare and insightful coming-of-age story that takes place in a rural part of northern Spain during the Second Republic when Spain had a brief flirtation with socialism and democracy. Against a background of the growing clouds of the Spanish Civil War, the film depicts the relationship between asthmatic 7-year old Moncho (Manuel Lozano) and his liberal schoolteacher played by the great Spanish actor Fernando Fernan Gomez (All About my Mother, The Grandfather).

Butterfly does not directly involve politics (at least until the end) but tells its story through snapshots of young Moncho, In the beginning, he is a quiet, shy boy who is afraid go to school because he thinks his teacher, Don Gregorio, will hit him. Gregorio, however, is a kind spirit who teaches his students to appreciate poetry, the beauty of nature, and the spirit of loving one another. Moncho grows from a frightened child to an enthusiastic young boy who is eager to learn all that he can about life. He divides his time between following his older brother’s exploits playing the saxophone in a local band and chasing butterflies with his teacher friend. The butterfly here seems to be a symbol both of freedom and transformation.

I felt very involved with this young boy’s world and found Lozano to be one of the most beguiling child actors that I have seen in a long time. His performance alone saves the film from Miramax-type sentimentality (which it occasionally drifts towards). Gomez is also wonderful as the compassionate teacher, symbolizing the humanitarian government that Spain enjoyed before the onset of fascism.

Eventually, Moncho must choose between his love for the teacher who opened his eyes to the beauty and wonder of the natural world and the ugly pressures of his family and neighbors to take sides in the political conflict. With the ending as shocking and memorable as Truffaut’s The 400 Blows, Butterfly powerfully illuminates the human cost of war. 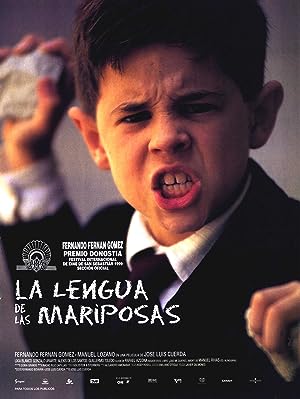 Butterfly (1999)
96 min|Drama|18 Aug 2000
7.6Rating: 7.6 / 10 from 7,404 users
For Moncho, it's an idyllic year: he starts school, he has a wonderful teacher, he makes a friend in Roque, he begins to figure out some of the mysteries of Eros, and, with his older …
Director: José Luis Cuerda
Creator: Rafael Azcona, José Luis Cuerda, Manuel Rivas
Actors: Fernando Fernán Gómez, Manuel Lozano, Uxía Blanco, Gonzalo Uriarte