Home » Non-English with Subtitles » Shoeshine 1946 with English Subtitles
View cart “Max and Me 2020” has been added to your cart.

At a track near Rome, shoeshine boys are watching horses run. Two of the boys, the orphan Pasquale and his younger friend Giuseppe, are riding. The pair have been saving to buy a horse of their own to ride. The boys meet Attilio, Giuse’s much older brother, and his shady friend at a boat on the Tiber. In return for a commission, the boys agree to deliver black market goods to a fortune-teller. Once the woman has paid, Attilio’s gang suddenly arrives, pretending to be cops, to shake the woman down. With a payoff from Attilio, the boys are able to make the final payment and stable their horse in Trastevere over the river. The fortune-teller identifies Pasqua and Giuse. Held at an overcrowded boys’ prison, they are separated. Giuse falls under the influence of an older lad in his cell, Arcangeli. During interrogation, Pasqua is tricked into betraying Giuse’s brother to the police. With their trial still in the future, the two friends are driven further apart.

I am a huge admirer of the films directed by Vittorio De Sica during the 1940s. Using what is referred to as the ‘neo-realist’ style, he was able to craft many brilliant classics using ordinary folks in ordinary situations. So, without stage-bound sets and professional actors, he was able to make films superior to Hollywood–and among the best films ever. Try watching “The Children Are Watching Us”, “Umberto D”or “Miracle in Milan” and you’ll see what I am talking about–brilliant and compelling fro start to finish. The only negative about the films is that sometimes they can be incredibly depressing–and that is certainly the case with “Umberto D” and “Shoeshine”. Depressing, but also amazing.

Like the other neo-realist films, this one stars very ordinary folks–lots of kids–not professionals. Considering how hard it is to get realistic portrayals from kids, he really has to be commended for this. And, like this style of film, it was shot throughout Rome in various locations–not sets. And in the process, De Sica really hit a home run–chronicling a very sad period in Italian history.

The film is set in Allied occupied Italy circa 1944. Folks are poor and hungry and jobs are hard to come by. Amidst this poverty, two kids (Pasquale and Guiseppe) are inexplicably saving all the money they can to buy a horse! And so, they take odd jobs, shine shoes and scramble to make a buck. When they are nearing their goal, they are tricked into doing a ‘simple’ job for Giuseppe’s brother–and get arrested for stealing blankets from the Allied forces. Surprisingly, despite their age and how non-serious their crime appeared to be, the two are dealt with VERY harshly and are sent to a god-awful juvenile prison–where starvation and neglect are the norm. Most of the film is set in this awful place and it’s a fascinating historical portrait of this period of time in recent history. I could say a lot more about what happens there but I don’t want to spoil the surprise. Suffice to say, it’s all very tragic–and you might want to have some Kleenex nearby just in case.

The biggest strength of the film is the realistic acting by all the kids. You don’t get the impression they are acting but that really are kids sent to prison. Also, although this might put some off, the story’s insistence that it NOT have a nice happy ending is also a plus. Although I don’t want a steady supply of depressing movies, I love that the film was not afraid to be sad in order to tell the story effectively. Well worth seeing and if you enjoy this film, I suggest you then try “The Children Are Watching Us” next–it is, in my opinion, De Sica at his directorial finest. 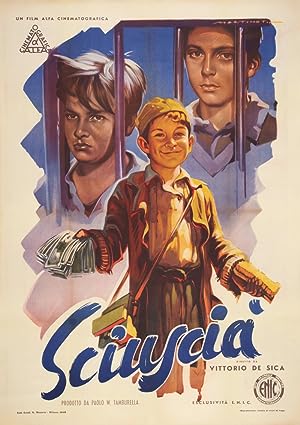 2 reviews for Shoeshine 1946 with English Subtitles