Home » Non-English with Subtitles » The Bobot 2018 with English Subtitles
View cart “Max and Me 2020” has been added to your cart.

The Bobot 2018 with English Subtitles

12-year old dreamer Vlad likes telling fantastic stories about his courage to his summer camp friends, although he is a bit of a coward himself. But one day Vlad finds himself in a real adventure as he accidentally gets caught in a conflict between two alien forces. Shapeshifting Trashmen, descendants of an ancient alien civilization, try to disable electricity on the whole planet by deactivating the defensive shield that protects the Earth from an approaching solar wave. In this way they challenge the all-powerful and mysterious Energy that enabled humanity’s technological progress and which we depend on more than ever. In this battle Vlad is helped by a transformer box called the Bobot, which holds the key to saving the world. While telling stories about fictional courage is easy, Vlad will find out that overcoming his fear in the real world is quite a challenge. Mankind’s future lies solely in his hands.

Great camera work, beautiful colors, great CGI, good music. Even though it have some holes in a plot, it’s something that tells us that Ukrainian cinema still have some potential and capable of making good movies, that’s a great start. Also it features great acting of ‘Professor’, looks like it’s the only one professional actor in whole movie. 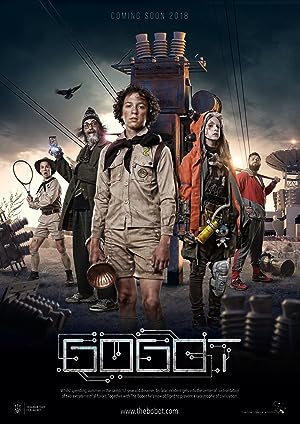 The Bobot (2018)
100 min|Adventure, Family, Sci-Fi|30 Aug 2018
7.1Rating: 7.1 / 10 from 61 users
12-year-old dreamer Vlad accidentally gets caught in a conflict between two alien forces. Together with an electric transformer box The Bobot, a brave girl and an eccentric scientist he has to save the world from a global catastrophe.
Director: Max Ksjonda
Creator: Ivan Timshyn
Actors: Arsen Shavlyuk, Volodymyr Rashuk, Viktor Grigoriev, Ivanna Borodai