Home » Non-English with Subtitles » Where Are You Going, Habibi? 2015 with English Subtitles

Where Are You Going, Habibi? 2015 with English Subtitles

Ibrahim falls in love with Alexander, a blond, blue eyed German criminal and show wrestler who is straight – an impossible friendship that surpasses the both of them.

The production values are minimum…the plotholes are gargantuan.

The editing…someone went a little mad with the scissors…the longest scene in the film is about meatballs! Most scenes last no more than 10 seconds…with a dizzying effect.

It took four writers to come up with this erratic script…which runs at a – measley-for-a-feature – 68 minutes. Plugging up those plotholes with some extra dialogue would have – at least – stretched this film to an acceptable runtime. If your audience is paying to see a feature…make it feature length!

The film does go from one ridiculous scenario to another within seconds and, by the end, is all neatly wrapped up with a multitude of loose ends!

A good place to start…make sure you have enough material to make a cohesive feature…it seems that this is a consistent problem with Herr Iben…! 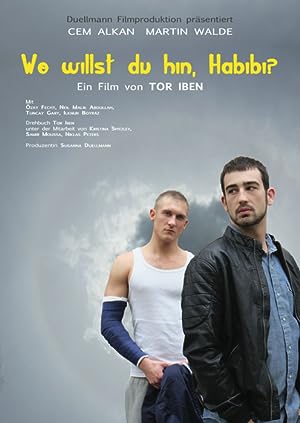 1 review for Where Are You Going, Habibi? 2015 with English Subtitles