Margo is struggling to deal with her son, Jon a rebellious and free-spirited teenager who runs with a bad crowd. After Jon is expelled from school, Margo sends him to live with his grandfather Max, a retired military officer who lives in a small coastal town and believes he can fix his grandson with his own style of discipline. This new home does not equal an attitude change, and when Jon is seriously injured after being involved in a grave crime, both boy and man will learn to face their fears and limitations.

Jon (Arón Piper) is in the throes of teenage rebellion, much to the exasperation of his widowed mother (Maribel Verdú) and the amusement of his grandmother (Susi Sánchez). But juvenile pranks and general teenage gobbiness suddenly give way to a more brutal act – the seriousness of which is seemingly incomprehensible to Jon – and his mother decides that sending him to stay with her estranged ex-military father (Tito Valverde) is the only course of action left open to her.

And so the stage is set for a ‘learning experience’ whereby the lad will learn some discipline and respect for his elders and the old man’s heart will soften and he’ll discover that there’s more to life than the rigid route of his daily 6km run. But, in fact, neither has that much to learn from the other.

Aside from the ill-thought out revenge on his next door neighbour, Jon’s bad behaviour amounts to talking-back to authority figures and pulling dangerous stunts on his bike – he’s hardly Marlon Brando in The Wild One. His headmaster suggests that he’s acting out due to losing his father five years earlier, but the conversations he has with his peers reveal him to be well-adjusted in relation to his father’s death. He falls in with a bad crowd in his grandfather’s neighbourhood but also remains polite enough to have a sensible conversation with the nice local girl (Sfía Mohamed) who takes a shine to him. He’s essentially just a run of the mill teenager.

Meanwhile Jon’s grandfather, Max, turns out not to be the overbearing demon that his grandmother has hinted at – he’s simply someone who has been conditioned to live via routine. The ‘confrontations’ between the two amount to Jon’s incredulity that there isn’t a television and Max confiscating Jon’s football boots when the lad’s asinine behaviour makes his study tutor quit. The lack of conflict – it doesn’t feel as if anything is at stake – creates a rather inert drama. A subplot involving the death of one of the local bad boys is stuck on to make Max superficially doubt his grandson – lesson learnt: you defend your own no matter what – but Jon’s behaviour doesn’t push the audience’s belief that he’s decent, even if unruly, to waver.

As Spain’s entry for the foreign language category of the 2014 Academy Awards (it didn’t make the short list), 15 Years And One Day is predictably ‘worthy’ but lacks any real spark. A family drama need not reinvent the wheel but it should preferably have the capacity to travel in more than one direction – this film is on one track and the outcome is never in doubt. 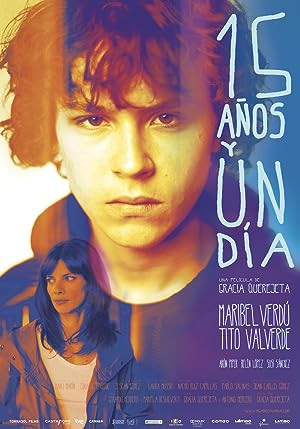 15 Years and One Day (2013)
96 min|Drama|07 Jun 2013
6.4Rating: 6.4 / 10 from 1,054 users
Margo is struggling to deal with her son, Jon a rebellious and free-spirited teenager who runs with a bad crowd. After Jon is expelled from school, Margo sends him to live with his …
Director: Gracia Querejeta
Creator: Santos Mercero, Gracia Querejeta
Actors: Tito Valverde, Maribel Verdú, Arón Piper, Belén López