A closeted young man goes home for the holidays and struggles to reveal his dire circumstances to his conservative family.

1985 (2018) was written and directed by Yen Tan. It stars Cory Michael Smith as Adrian, a young gay man who is out of the closet in NYC, but still in the closet in Fort Worth. Adrian is handsome and athletic. He doesn’t look or act like the stereotyped version of a gay man.

His parents are working class evangelicals. All they want is for Adrian to marry Carly, the girl friend he left behind. (Jamie Chung, a Korean-American portrays Carly. It’s interesting that no one objects to Adrian marrying an Asian-American woman.) Virginia Madsen plays Eileen, Adrian’s loving mother. Michael Chiklis portray’s Adrian’s father Dale, who fulfills the stereotyped image of a tough, blue-collar right-wing guy.

This movie could have been a simple coming-out story, but it isn’t. There are complexities within each character, and there are unexpected moments of love and concern.

We saw this film at The Little Theatre, as part of ImageOut, the excellent Rochester LGBT Film Festival. It will work well on the small screen.

P.S. In a brilliant piece of programming, ImageOut showed the movie “Buddies” on the same day as it showed 1985. Buddies was produced in 1985. It was the first movie that openly referred to the HIV/AIDS crisis. The year 1985 was a really bad year to be gay. 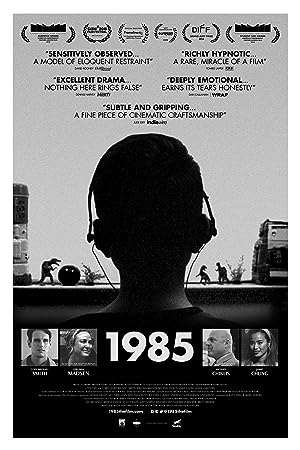