Victor has just moved to Quebec with his mother. His continual late at his new high school, and his behavior frequently lands him in the principal’s office. One day, he witnesses a violent event that will turn his life on its head and lead to him losing all bearings. Between France and Quebec, life and death, virginity and sexuality, adolescence and adult life.

Good intentions but too many flaws

For his first feature film, Christophe Cousin decided to autopsy the relationship between a mother and a grieving son by the father’s death. Since they moved to Quebec, the two are almost more talk, teenager accusing her mother this forced move. The child withdraws into himself, until the suicide of a fellow develops an obsession with death. In rebellion against its own existence, the shortened life of the other will become his escape, how to confront her own grief. Gradually, he will interfere in the privacy of this being lost, trying to drown his own grief in the misery of others.

And there is something poignant in the course of this cold teenager with his mother and life, including through the provision of Zechariah Chasseriaud, perfect in the role of this kid who grew up too fast. Nevertheless, the talent of the actors can not erase too many blunders of a wobbly film, lost in his own ambitions. Missing drivers son, “2 times 3 movements” never truly confronted his subjects as if the filmmaker had himself afraid of that omnipresent Death. Making use of ellipses and allusions to try to hide the flaws of an awkward scenario, the film never manages to translate the discomfort of his characters. Despite the promises of the initial situation, viewers will have to settle for a terribly monotonous and tasteless drama. Strongly shame … (google translated) 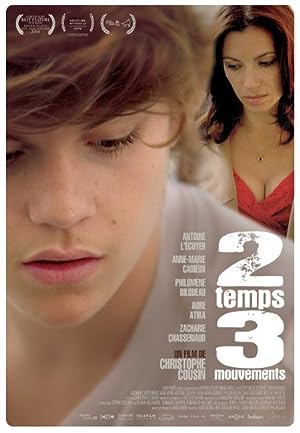 False Movement (2014)
85 min|Drama|N/A
6.1Rating: 6.1 / 10 from 21 users
Victor (15) is dragged by his mother from Paris to Quebec City, to build a new life for themselves, following the death of his father. While skipping class one afternoon, he sees another a student on the ledge.
Director: Christophe Cousin
Creator: Christophe Cousin
Actors: Aure Atika, Zacharie Chasseriaud, Philomène Bilodeau, Anne-Marie Cadieux