Home » Movies in English » A Series of Unfortunate Events 2004

A Series of Unfortunate Events 2004

Three children – Violet, Klaus and Sunny Baudelaire – are left orphaned when their house burns down, with their parents in it, in mysterious circumstances. They are left in the custody of a distant relative, Count Olaf (played by Jim Carrey). It is soon apparent that Count Olaf only cares about the children for their large inheritance.

Some movies are just plain fun to watch. This is one.

It’s funny, it’s dramatic and it’s a great visual treat with Tim Burton-esquire wild images throughout. This is a superb job of combining great visuals, special effects and an entertaining story.

The two kids, played by Emily Browning and Liam Aiken, should get top billing since they are in every scene while Jim Carrey is in about half.

Everyone in this film is a hoot, especially Carrey who plays “Count Olaf” and then disguises himself by pretending to be other people throughout the story. Whomever he was playing he was hilarious. With his crazy persona, Carrey was good choice for this role. The lines he delivers are so hammy they make me just laugh out loud. I appreciated his work even more on the second viewing.

The kids are likable, good-looking and decent actors and the “baby” is given the funniest “lines” in the movie – all in subtitles.

This film is too dark for the little kids but fun for adolescents on up. There is almost no profanity in here and no sex. The sets are particularly strange and interesting, from the various houses to the clothing to the computer-enhanced scenery, with gorgeous colors. Make no mistake: this is a very pretty film with so many fascinating objects in here to view that even multiple viewings can’t possibly pick them all up. 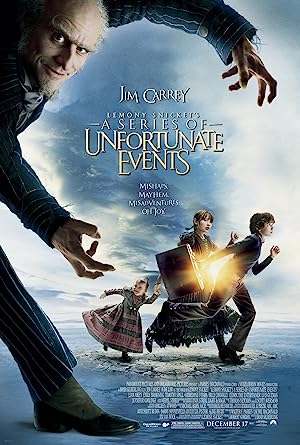 1 review for A Series of Unfortunate Events 2004