Home » Movies in English » Another Country 1984

Based on the award winning play by Julian Mitchell, the film explores the effect of Public School life in the 1930’s on Guy Bennett as his homosexuality and unwillingness to “play the game” turns him eastwards towards communist Russia.

In 1983 Julian Mitchell wrote a play based on fact about a young man (Guy Bennett) who, seeing the constraints of British society circa 1930, embraces his sexuality in a time when even the words were criminal, sees through the sad folly of the British class and empire system, and eventually abandons England to become a spy for Russia. The played starred a young 21-year-old Rupert Everett and a 20-year-old Kenneth Branagh as Guy’s heterosexual roommate Tommy Judd, an obsessed Marxist as ready to leap out of the norm of British society as Guy – but for different reasons. Director Marek Kanievska adapted Mitchell’s challenging play for the screen, and in 1984 ANOTHER COUNTRY became a sterling recreation of the play and a controversial film introducing the extraordinarily talented and continuingly popular Rupert Everett (who remains one of the few ‘out’ actors enjoying success in Hollywood). Colin Firth assumed the role of Tommy and Cary Elwes became the gay love interest for Everett’s Guy Bennett. The film is one of the finest examinations of the rigid, archaically proper British schools for young men (Eton) where class is paramount in importance, rank reigns, and medieval views of sexuality and out of line thought are treated with public corporal punishment and (worst of all!) the inability to rise in the ranks of the ‘important’ lads. Throughout the film there is a powerful parallel between Guy’s striving to become the head of the class being thwarted by his pursuing is passion for his love of men, and the ‘religious zeal’ approach of Tommy’s absorption in Marxism, seeing Communism as the only way to correct the ‘vile sickness’ of current British politics and social strata. The undercurrents of bigotry are brought into focus when a fine young lad (Martineau) is caught in a sexual act with one of his classmates and is shamed into hanging himself. And when Guy’s sexual tryst with James Harcourt is ‘discovered’, Guy is beaten in front of his compatriots, prompting him to see (with Tommy in agreement) the dead-end of British society and leave the remnants of a once glorious empire behind.

As a delightful Special Feature on this very well made DVD there is a scene from the stage production in the year prior to the film, and the dialogue between Rupert Everett and Kenneth Branagh is incisive and brilliant. This film is a masterpiece, not only in the screenplay, but also in the sensitive direction, the exquisite cinematography, and the amazingly superb acting of not only Everett and Firth, but of the entire large cast. An absolutely brilliant film. 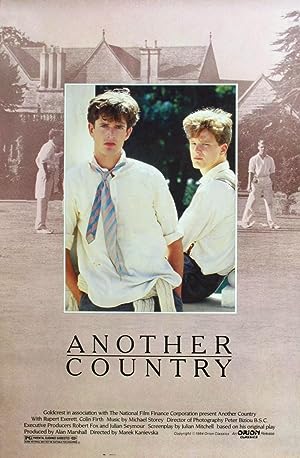 Be the first to review “Another Country 1984” Cancel reply