The bathhouse – a place where gay men can go to relax, kick off their shoes (and clothes) and enjoy each other’s company. “Bathhouse” takes you into this world of towel clad men, back room sex and the search for that ever elusive perfect boyfriend

When a film wants to be real to life, and shows us what life is all about, they either succeed or don’t. This film is in the latter. Although the acting is first rate, the story doesn’t wash. You have a young man ( looking like a younger Jackie Chan ), who finds out is gay and joins the club , The Bathhouse. So far so good, he then falls in love with the local hunk, Chris. Chris like most men wants to share his body with as many ( in this case ) men as he can.

The director then cuts away from the story to show us how in real life these people meet, thru the internet, at the park, cell phones etc.

My question is, thru out the whole of the film, the hero ( if you like ) manages to leave his parents, not have a job, go to the Bathhouse, have sex with every man he meets, and he manages to do this without spending any money, or worse get a disease. Does this mean that all gays in the Philippines don’t have to have money. You walk around Manila and say your gay and people feel sorry for you and give you money. Even better all gays are clean and without aids. The film is helped by the Aids counsel in the Philippines. Nothing like that is mentioned in the film.

If your going to make a real life film, DO IT, and don’t go half way. The story is bad, just like the jeans of Chris, he never changes them. 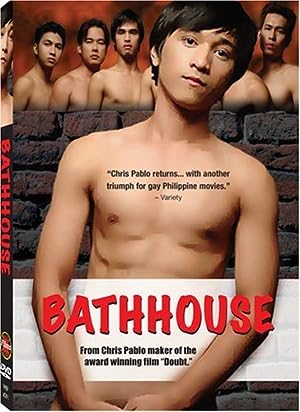