A 14-year-old video enthusiast is so caught up in film fantasy that he can no longer relate to the real world, to such an extent that he commits murder and records an on-camera confession for his parents.

Caution!Caution! Michael Haneke ‘s “Benny ‘s video” is one of the most terrifying movies ever made.The link between it and “der Siebente Kontinent” is obvious:the latter ends with an empty TV screen.The 1992 effort is another way of tackling total destruction.Resuming a subject which a lot of directors have already broached -incommunicability between a teenager and his folks-,Haneke pushes it to its absolute limits :particularly if you do not know Haneke at all,you will not believe your eyes.

SPOILERS In this work,there’s before and after.So harsh is Haneke’s screenplay ,so incredibly devoid of humanity are his characters that the viewer is left panting for breath. Benny films a lot a things ,his bedroom is full of TV screens -we could draw a parallel between “Benny” and the “Peeping Tom” s hero,whose apartment was full of screens as well;and although the latter was an English movie,the male lead,Karl Boehm ,was Austrian too.But Haneke ‘s got his own way to hoe ,so he does not stop here and goes where nobody dares.

After murdering a girl (a senseless crime),Benny seems almost indifferent.By chance,the parents watch the horrible thing that happened on the video:a close shot of Angela Winkler shows her distraught face and her moist eyes.Then expect the unexpected:the parents want to conceal everything and to pick up the pieces as if nothing has occurred. The movie does not lose steam towards the end ,as an user claims:the trip to Egypt ,with its trite and amateurish -Benny’s camera?- sequences,the mother enjoying an ice cream or relaxing at the swimming-pool or these exotic landscapes, just highlights the bourgeoisie’s selfishness ,pushing people out of their way,in a way only Bunuel dared.

A legend (or is it Stephan Zweig?)tells that Vienna is ,par excellence , the capital of the blues and they say suicide rate is higher there than anywhere in Europa.At any rate,Austria has found a director who ,like Ozon in France,Dardenne in Belgium or Amenabar in Spain is making the most modern inventive European cinema. 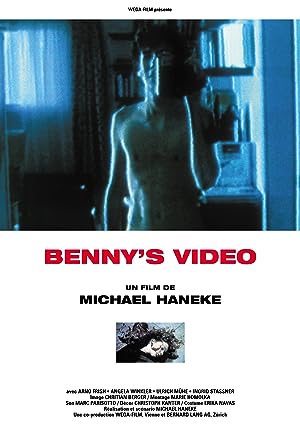 Benny's Video (1992)
105 min|Crime, Drama|11 Feb 1993
7.2Rating: 7.2 / 10 from 12,114 users
A 14-year-old video enthusiast is so caught up in film fantasy that he can no longer relate to the real world, to such an extent that he commits murder and records an on-camera confession for his parents.
Director: Michael Haneke
Creator: Michael Haneke
Actors: Arno Frisch, Angela Winkler, Ulrich Mühe, Ingrid Stassner