In a college, three friends form a secret society. Their objective – going to America. A night, after one of their secret meetings, one of them see a man coming out from a wall. Then the day after he talks about it, he disappears. Then the second one vanishes. Are they gone to their dreams? That’s when the art teacher is murdered. Suspicions now are too high so the third one decides to investigate.

Youth culture in the 20th century is literally a mystery. It may have started, innocently enough, with a couple of grand celebrated coming of age novels – Booth Tarkington’s “Seventeen” in the U.S. and Alain-Fournier’s “Le Grand Meaulne” in France, both published appropriately enough in the teens of the last century. But from then on appeared mystery and action novels aimed squarely at a teenage public in no hurry to grow up and set in a contemporary setting (unlike, say, period pieces like “Treasure Island” or “Kidnapped”, or all-out fantasies like “The Lord of the Rings”). The elements of danger, mystery and suspense were always present in that sub-genre of literature as if the thrill of puberty and adolescence had to be naturally expressed through the predominant feeling of fear, left over from the terror of childhood fairy tales. This tradition yielded an untold number of “Hardy Boys” novels and Boy Scout romances on both sides of the Atlantic. This is the tradition that would eventually produce “Scoobidoo” cartoons as well as the Harry Potter novels and that gave the book from which “Les Disparus de St-Agil” is extracted. It is a worthy film with many brilliant adult and juvenile actors (Eric Von Stroheim, Michel Simon and the young Marcel Mouloudji who would eventually loose his first name to become the singer-composer Mouloudji of St-Germain-des-Prés fame in the 50’s; even eventual singers and actors Charles Aznavour and Serge Reggiani appear uncredited as school-boys). This story of children disappearing and reappearing while solving a murder-disappearance enigma with supernatural overtones that has stumped more mature minds in their boarding school is a microcosm of adolescent identity acted out with all the natural of Jean Vigo’s earlier “Zéro de conduite”, thanks to Jacques Prévert’s gift for believable dialog. The school’s secret society is called “les chiche-capons”, which is synonymous with after-school shenanigans and has become the name of a famous French pop group today. The expression is an argot rendering of the chicken games kids play to dare themselves into being braver (chiche = I dare you; capon = chicken, coward, non-entity). Christian-Jacque’s direction of this claustrophobic drama is modern, sympathetic, limpid and utilitarian but very different from the sweep and scope of his “comic epics” like “Les Perles de la Couronne” (1937, for Sacha Guitry) or “Fanfan La Tulipe” (1952, with Gérard Philipe). 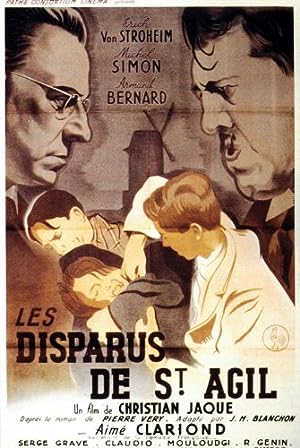 Boys' School (1938)
98 min|Drama, Mystery|05 Jun 1939
7.5Rating: 7.5 / 10 from 709 users
In a college, three friends form a secret society. Their objective – going to America. A night, after one of their secret meetings, one of them see a man coming out from a wall. Then the …
Director: Christian-Jaque
Creator: Jean-Henri Blanchon (adaptation), Pierre Véry (novel)
Actors: Erich von Stroheim, Michel Simon, Armand Bernard, Aimé Clariond