University student Ryo works at a bar part-time to earn money. He is not enamoured with his job or life for that matter. He is introduced to a female pimp who first tests him, and once he passes the hurdle, employs him as a male escort. Ryo takes to his job like a duck to water and prides himself in satisfying his diverse clientele. Getting to know the needs and wants of his customers helps Ryo understand himself better. With understand comes cognition and with cognition comes questioning.

Ryo finds women to be dull and his life to be pointless. He has boring encounters with girls, refuses to engage with them, then stalks off to his part time job at a bar. One night, his colleague brings in a mysterious middle-aged woman who is as taken with him as he is intrigued by her. Mido-san runs a prestigious male escort club and wants Ryo to try out. Almost failing the first test, she takes him on and he begins his work as a male escort.

“Call Boy” is a fascinating look at sex and gender roles in a country where sex mostly caters to men. Women, so often overlooked in Japan, are rarely allowed to say their desire aloud, lest they appear to be loose. Sex in the media for women is often traumatic or sees many women sharing one man. Here, director Daisuke Mimura gives respect and wonder to women of all ages and desires. Ryo, a blank canvass of immature ignorance and apprehension, is our gorgeous, dreamy pair of eyes and our own escort through this unexplored part of femininity. Each scene so explicitly laid out, taking time from the first kiss to the final throes, the mess and the beauty. Each female autonomous and self-realised, making demands to increase their pleasure in the moment, or educate Ryo to be a better lover.

The movie is shocking. Frank in its depiction of sex in a country where fantasy is favoured over realism, the roots of the movie (a novel from 2001 and stage play in 2016) are on show throughout. The hazy, dreamlike hues of darkened bedrooms where light slips in just a crack, or the stuffy, dim banality of a love hotel in Shinjuku beautifully bounce light off of bodies while various fevered jazz and instrumental music riffs in the background. Mimura refuses to turn away from desire and why should he? His cast give their all to bring the sexual desires of women legitimacy.

Tori Matsuzaka, who plays Ryo, is undeniably beautiful. His blank stares giving way to eager understanding, his body lithe and vibrant. As he learns about the women who pay him, he learns about his own wants. The cold, indifferent mask slipping to show warmth and kindness. Sei Matobu, as the leader of the agency, gives a good, conflicted performance of refrained desire and mothering love. The various women Ryo encounters each offering different facets of modern Japanese women. 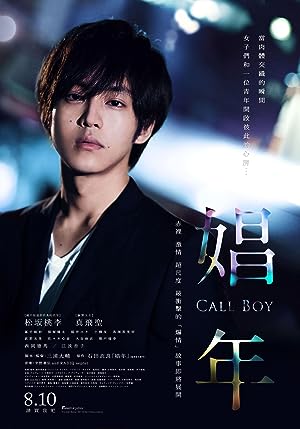 Call Boy (2018)
119 min|Drama, Romance|N/A
6.2Rating: 6.2 / 10 from 282 users
University student Ryo works at a bar part-time to earn money. He is not enamoured with his job or life for that matter. He is introduced to a female pimp who first tests him, and once he …
Director: Daisuke Miura
Creator: Ira Ishida (based on the novel by), Tsutomu Kuroiwa (screenplay)
Actors: Kyxc3xb4ko Enami, Kenta Izuka, Yxc3xbb Koyanagi, Erika Mabuchi

1 review for Call Boy 2018 with English Subtitles on DVD