The school boys of two villages in France are fighting. Their trophy are the buttons they will snatch from the enemy. This fight will bring those kids to everlasting friendship…eventually.

French cinema has a great ability in conducting films set in childhood, with ambiguous and great messages that are a clear example of an allegory of important values such as friendship and cooperation. Clément already done similar work in “Jeux interdits” (1951). a notorious film of great educational content. In 1962, Yves Robert performs similar work, which shows those important and universal values through children’s minds. Both films look the same, and has to his credit an ambiguous anti-war message, but Clément chose a much more raw and dramatic opposite Yves Robert offered us this magnanimous work.

” La guerre des boutons ” is a song and an allegory to childhood, where curiosity and innocence are the most characteristic attributes having children. We do see the world we know each and every one of us, but from his innocent look, with much more easy going. That’s where all the power comes from this movie, because its protagonists playing war according to the letter all its rules, with a greater sense of loyalty and honor that which is contemplated in the true conflict.

Its approach is exquisite and original. It is a great portrait antiwar, where a larger sample of securities by children from adults.

“La guerre des boutons” is a wonderful faraway ode to childhood, a nostalgic trip to the past in which we become children an hour and a half, where everything was discovered, in which the games were serious things. It’s a kid’s movie but its strength lies in its universal character, not a story just for kids, it’s for everyone. 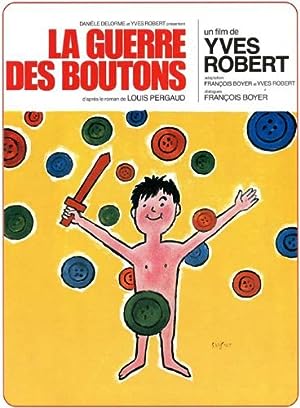 War of the Buttons (1962)
90 min|Comedy, Family|18 Apr 1962
7.5Rating: 7.5 / 10 from 2,164 users
The school boys of two villages in France are fighting. Their trophy are the buttons they will snatch from the enemy. This fight will bring those kids to everlasting friendship…eventually.
Director: Yves Robert
Creator: Louis Pergaud (novel), François Boyer (adaptation)
Actors: Jacques Dufilho, Yvette Etiévant, Michel Galabru, Michèle Méritz