Just in case you did not believe the “viewer discretion advised” warning at the start of the film, we open with an older man masturbating while looking out his window at something we don’t see. We then jump to the same man talking on the phone to his mother and we understand that he lives alone, has probably always lived alone and sees quite an isolated type. When a teenage boy comes to his door with an injured hand, he reluctantly lets him come in to clean it up. They get to talking and the older man clearly feels uncomfortable with the boy being in the house. As they talk it becomes apparent that the man has a history which makes him right to be nervous, and that the boy is not just there by chance.

This is a very difficult film to watch for many reasons and it has to be said that I did not “enjoy” the film although I did appreciate it. The plot is heavy is sexual content, whether it is discussed or acted out and this alone is very uncomfortable to watch. What is layered on top of that though is another type of discomfort as we appear to have walked into the middle of some sort of physiological mind games between this minor and a convicted sexual predator. This dynamic reminded me of the film Hard Candy and I sort of expected it to play out like that but what I didn’t expect was how much it pulled me back and forward in terms of which character was in control here.

The short has a constant edge to it that starts when we see the teenager quickly slip the door locked as he comes in; this edge keeps tension throughout and keeps the viewer engaged even as the discussion and actions push away. It also be said that both the characters are at least a little repulsive to the casual viewer but what the film does well is sort of make us feel for the man but also allows us to understand that his addiction and compulsion and bad judgment is what has landed him here, not just the manipulation by this boy. The performance from Alperin is great throughout – a very difficult role to play due to the content of the film (and the content of his character) but he does it really well so the viewer is with him a least a little. Chrans also holds the screen really well and works as temptation but also a deadly trap and the viewer feels this the whole way.

Crawford’s script is tight and it is just a shame that the ending is not a bit stronger. Personally I did like the phone call in the end credits because it sort of leaves it up to the viewer but for me I like to think it is a call to his mother to prepare her for the worst because he knows he will have to confess to the police and, even if they buy his story it will still be a conviction and still be jail – but the man is not a murderer. The direction is very good. We have camera movements putting us in the room without being too mobile so as to distract with jerky motion, but we also have the scenes played out in the occasional long takes and wider shots, which gives the film a more natural feel and allows the actors to act.

Dog Meet Goose is not a film I enjoyed because it is so tense and uncomfortably throughout, but it is a film I appreciated for its work. The acting is topnotch and the material, although repellent in the main, does engage and draw you in to care for the man while also still being free to judge him at the same time. It is a very difficult watch and I guess it will split audiences right down the middle but for me it did enough well to justify watching even though it was tough. 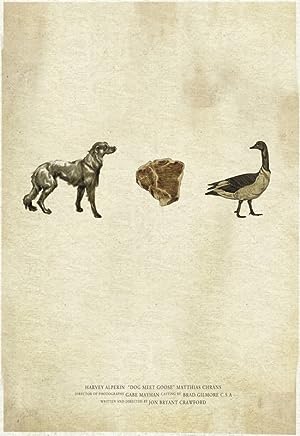 Be the first to review “Dog Meet Goose 2012” Cancel reply