Two boys with a troubled home situation decide to run away to Berlin.

This short film more than delivers on inspiration. The short captures the hard-hitting realism of teen rebellion vs mundane home life. It also brings to light how two seemingly similar neighbouring houses are very different homes. Both Thijmen and Robin yearn for freedom and autonomy. Thijmen from his overprotective parents (or are they? under the circumstances I would tend to agree with them) and Robin’s abusive uncaring father). The short truly encapsulates all it means to be a teen. It is gripping right from the very start – the scene on the bridge. It is all very real and honest with artful composition and a very raw script. Incredibly tactile visuals and sounds (especially the bridge scenes and the partying scenes). Pervasive filming and the construction and placement of shots is excellent. 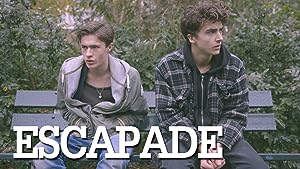 Be the first to review “Escapade 2014” Cancel reply