Aaron (Zohar Shtrauss), a respected butcher and a family man in an Ultra-Orthodox Jewish neighborhood in Jerusalem, leads a conservative life of community devotion and spiritual dedication. Aaron’s life undergoes a series of emotional changes following the arrival of a young apprentice (Ran Danker) to his shop. Consumed with lust, the handsome “Yeshiva” student irreversibly transforms the intricate beliefs in the once-devoted butcher’s life – leading Aaron to question his relationships with his wife Rivka (Tinkerbell), children, community, and God.

Recently I’ve watched several gay-themed films from a few under-developed fields (cinema- wise), PLAN B (2009) from Argentina, UNDERTOW (2009) from Peru and this one from Israel.

A Jewish gay story of a married gay man in the closet, the confrontation between sexuality and religion is the momentum pushing the film trudge slowly against time (though the entire film only lasts 90 minutes).

What’s the novelty here? The narrative is being exaggerated minimized, it is the arresting camera work lingers since the very first shot, with a precision of the framing whereby the language of camera is ample. which fabricate a haunting Jerusalem with its patient pace.

The denouement is metaphorically ambiguous, I am not going to spoil it here, which does heave the whole film onto an unconventional category, a self-indulgent commitment, luckily, not too opaque.

The film is the feature debut of the rookie director Haim Tabakman and the obscure cast (a subtle performance from Zohar Shtrauss and a young and raw Ran Danker) furnishes the film with a frank and sincere tangibility. Damn, I wish the film could be more dauntless and detailed.

The world of Jews is nowhere near my real life, which has inevitably hindered my comprehension here, substantially the religious part. I could only acknowledge that the film owns its glamor in his paper-thin structure, which is a sturdy move for a new director. 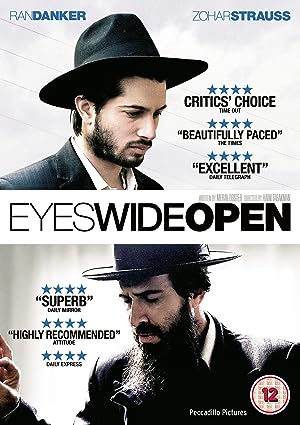