‘LOVE’ starts with two people, but ‘FAMILY’ is more than just the two.

Phoon (ASDA PANICHKUL) and Yuke (NAT SAKDATORN) a handsome urban professional gay couple in their 30’s live in a sleek modern apartment that has all the trappings that come with success. They even have an adorable 7 year old son called Butr (Arituch Pipattangkul) whom Phoon had adopted at birth from an orphanage after his mother had abandoned. All they are now waiting for is the Thai Government to pass a law to allow same-sex marriage and then they can put their whole family on a more legal and secure footing.

However after Butr got into a scuffle at school when a classmate had made derogative remarks about him not having a mother, the two Dads where summoned to meet with the teacher with the other boy’s father who turned about to quite an aggressive homophobe. He in turn calls the local Child Welfare people, and so one day Phoon and Yuke get a unexpected visit out of the blue from a Miss Rattiya (Sinjai Plengpanich) who insists that her meddling is for ‘the child’s own good’.

She later takes it upon herself to locate the birth mother who had the baby when she was still at University and had managed to keep the pregnancy a secret even from parents. The mother had another son with her current boyfriend, but that child had been in a fatal accident, so still bereft with grief, she seized on this opportunity now being offered to meet Butr and become a mother figure to him.

Phoon reluctantly agrees to his son meeting his birth mother simply because he believes it is the best decision for the child, even though it will cause such a chasm between him and Yuke, that at one point it looks even like it may even push their own once perfect relationship, beyond repair.

This rather compelling highly emotional drama is a simplistic tale on Thai culture where homosexuality is legal, but far from embraced with open arms from society in general. Whilst Miss Rattiya accepted that the law recognized the legality of Butr’s adoption, she refused to accept it either on moral grounds or the fact that it was in the best interest of the child. Her dilemma here was whilst she obviously had low opinions of gay men, she still expected them to be principled enough to allow the child to be raised by what she kept insisting was a ‘normal family”.

The movie, the directing debut of Palatpol Mingpornpichit, keeps it all quite simplistic without getting overly deep or complicated, and the production is greatly enhanced by the undeniable chemistry between the two protagonists, one of whom is one of Thailand’s mist successful pop singers. Naturally the kid playing Butr was totally adorable, so much so, that even we would consider adoption this one time.

The ending is, thankfully predictable, but it is still worrying that in this day and age, that LGBT community’s rights can still often fall so short . 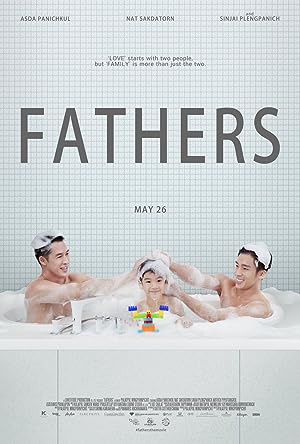 2 reviews for Fathers 2016 with English Subtitles