A drama set in turbulent, turn-of-the-millennium Ecuador and centered on a young man who begins to develop complicated feelings for Juano after he saves him from a beating.

Shy, poetry-scribbling Juan Pablo, known as Juampi (Juan Manuel Arregui), is dropped off for the Carnival holidays at the villa of his uncle Jorge (Peky Andino), currently embroiled in a banking scandal that’s filling the airwaves. His cousin Maribel (Canela Samaniego) is a decent sort, but her brother Jorgito (Irwin Ortiz) is a jerk; at least Maribel’s friend La Flaca (Manuela Merchan) is rebellious fun, using Juampi as cover whenever she wants to go off with her b.f.

One night, Uncle Jorge and his staff surprise a couple of guys stealing hubcaps; they beat one to a pulp, but the other, Juano (Diego Andres Paredes), escapes with Juampi’s help. The two strike up a friendship through which Juampi, of well-off European stock, discovers life on the other side of the tracks, along with the local black-metal scene. He also starts articulating his attraction to Juano, at least in his ever-present notebook, uncertain whether the feeling is reciprocated.

Though hardly original, “Holiday” works best as a classic tale of a teen on vacation coming to grips with his sexuality, and the rest simply lends a bit of color, verging on depth but rarely quite reaching something profound. Araujo is only partially successful at building parallel tensions between Juampi’s self-discovery and the banking crisis embroiling the nation, and most of the real news footage he edits in feels like an extraneous hook.

Far more natural are the hesitant Juampi’s observational silences, nicely captured by young Arregui with a mixture of timidity and curiosity that says as much about vulnerability as it does about desire. Occasional moments meant to add to an understanding of character, such as Juampi’s nosebleeds, are superficially tossed in and then forgotten. The ending, however, is absolutely spot-on.

Visuals have an innocent sensuality, especially sensitive to plays of light and always appealing to watch. Music occasionally takes too much control of a scene. 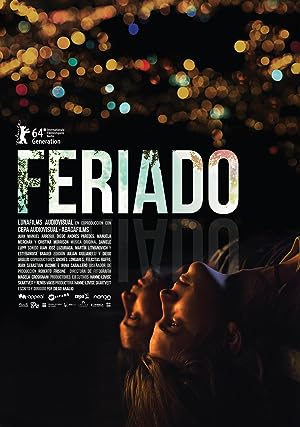 Holiday (2014)
82 min|Drama|01 May 2014
5.7Rating: 5.7 / 10 from 267 users
A drama set in turbulent, turn-of-the-millennium Ecuador and centered on a young man who begins to develop complicated feelings for Juano after he saves him from a beating.
Director: Diego Araujo
Creator: Diego Araujo (screenplay)
Actors: Juan Arregui, Elena Vargas, Cristina Morrison, Peki Andino