From Beginning to End 2009 with English Subtitles

Two brothers develop a very close relationship as they are growing up in an idyllic and happy family. When they are young adults their relationship becomes very intimate, romantic, and sexual.

I don’t understand why mutually consenting sex between brothers near the same age is a big deal. It’s not as if they would produce deformed offspring. That particular taboo makes no sense to me. I’m not advocating gay incest, but horror at the idea of sex between brothers – even in a movie, and even among gay men – mystifies me. I’ve never been at all attracted to my own brother, but two brothers’ falling in love in a movie does not make me the least bit uncomfortable. I don’t feel compelled to try to twist it into something else that’s more acceptable.

People who say it’s easy to forget that Francisco and Thomás are brothers in the latter half of the movie must be TRYING to forget it, because the movie never stops affirming the fact that that’s what they are. Fighting that battle while trying to enjoy a movie must detract a lot from the enjoyment.

This is a flawed but interesting and unusual movie, and I can understand why even the many positive reviews it gets have trouble describing it. It has been called a fairy tale because Francisco and Thomás seem to live in a dream world as cut off from the real world as Sleeping Beauty in her castle. But aren’t all young lovers like that? Isn’t that what love and hormones do to young people? Doesn’t the rest of the world tend to fall away when the beloved comes into view? That’s how it was when I was young.

So to say that this is a fairly tale is simply to say that it is a love story. It’s an unusual love story, but fundamentally it is just like any other romance movie. If anything, its depiction of the all-consuming ecstasy of young love is MORE realistic than most movies are, not less.

Others have emphasized the parents’ evident oblivion or even acquiescence to what is going on under their noses, but that seems to me like just another symptom of the irrational taboo I mentioned earlier. It’s like: “What those boys are doing is WRONG! Why don’t their parents stop it?” But, again, I ask: Why? Who is hurting whom? Nobody that I can see.

When they’re children, they simply love each other and love to be together, and they are freely affectionate with each other. Is that bad? Why? Should the mother slap her son when he kisses his younger brother on the head or puts his arm around him or holds him while they sleep? Why? Is fighting better? Is sibling rivalry better than sibling affection? Evidently it is to many people.

Neither of those is what I see as a weakness in this movie. It’s true that the movie is unreal, but what seems most unreal to me is not the brothers’ relationship with each other or with their parents. That’s just an extraordinarily loving and mutually accepting family, which is almost never seen in a movie or in real life but should be everybody’s ideal of what a family ought to be. If that’s not the unconditional love people rave about nowadays, I don’t know what is.

Another weakness I see is in the dialog. The core story about the brothers is fine – it’s a love story – but what people say to each other is stilted and awkward, not at all the way real people talk. It’s like the way people talk in TV commercials. And the problem is not just in the English subtitles, which actually are very good: what they’re saying in Portuguese sounds just as phony.

And the final weakness I see is in the direction. The director seems to be trying to make something besides JUST a love story, but what that other something is never comes clear. It feels as if he is intentionally trying to make it an allegory, or an epic myth, or a ballet, or something else abstract that wrestles constantly with the extremely simple love story which the movie actually is.

The scene in which the adult brothers slowly undress for the first time as they face each other across the room is particularly strange, like something out of a kabuki performance. That obscure tension between what the movie is and what the director is trying to make it be doesn’t ruin the movie, but it IS distracting.

All four actors who play the two brothers as children and then as adults are very good and very beautiful, inside and out. What the director did an EXCELLENT job of is getting straight actors (which I assume they all are) to be so convincingly loving toward each other. Every affectionate gesture, every touch, every loving look is totally convincing. That could NEVER happen in an American or Canadian movie, or even in a European movie, and I’ve never seen it in any other movie from Latin America. It is a unique and astonishing accomplishment.

The director also gets credit for the movie’s other great accomplishment, which is simply that it got made. A movie about love, passion, unshakable devotion, loyalty, innocence, tenderness and limitless generosity between two men is rarer than hens’ teeth. The scene in which they exchange wedding rings alone together at home is one of the sweetest, sexiest scenes I have ever seen. I have never seen any other movie that even comes close to the love between these two men, and I have seen hundreds and hundreds of gay movies. This is far from the best of them, but it is the most wonderful. 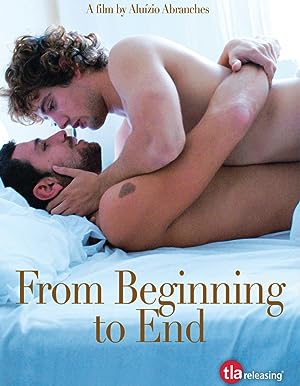 2 reviews for From Beginning to End 2009 with English Subtitles