Georges Bataille’s Story of the Eye 2003

The film takes place in a seemingly abandoned house where a group of people engage in wordless acts of passion. It covers a period from evening to morning, and the sexual couplings among the members of the house becomes increasingly harrowing as daylight arrives.

The problem with many of the reviews for this film on this site is they aren’t approaching the film at its level. This is a very important thing to do. You don’t go into an action film with melodrama expectations, for instance.

When you watch an experimental film, that was also presented as an art installation utilizing multiple screens (not all visible from one place) playing simultaneously with their sound audible everywhere, you don’t go in expecting a traditional narrative with clear character psychology and an obvious point, like we are trained to read from traditional film. Likewise, we shouldn’t be going in expecting it to be a direct adaptation of Bataille’s novella. Again, an experimental adaptation is nothing like a traditional adaptation. This film adapts it in transgressive intent, some generalized thematic concerns, etc. etc.

I would also suggest reading the novella before watching this film. And that doesn’t mean skim through it, or pseudo read it, taking care to only grasp the narrative structure and do little to grasp his motifs, themes, concerns, and overarching thesis. Once you understand what the book was doing and saying, or at least have an idea of what you think the book was doing and saying, you may have a better time approaching this film.

The most important thing to keep in mind – it’s an experimental art film, you don’t approach films like this the same way you would approach blockbusters.

Lastly, would people please stop putting up scene breakdowns? Not only is it reductive to the overall action, but they are also always incorrect and missing parts. 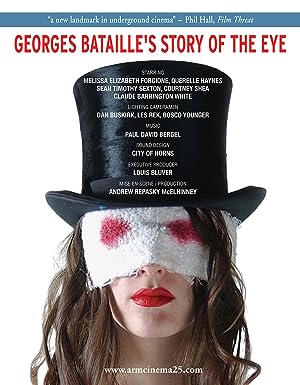 1 review for Georges Bataille’s Story of the Eye 2003