The struggle between two generations and its thin line between trust, friendship and betrayal.

Parents, beware. If you have teenage children, don’t go see this film, otherwise you will never look at them the same way you did before. Or should I say: please go see this film, in order to better understand why your children do what they do.

Flemish director Fien Troch shows what they do, without any restriction. They hang around, smoke weed, ride their skateboards, flirt with each other, occasionally have sex, play video games, and endlessly check the screens of their smartphones. Their teachers and parents try to communicate with them, but to no avail. They say the wrong things, are unable to pick up signals, and send out the wrong messages. But the inability to communicate is mutual: the teenagers don’t understand their parents, and don’t even try to. They just don’t seem to bother.

One of the best scenes shows how one of the teenagers is given a television set for his bedroom. His uncle has trouble installing the set, but the teenage kid is completely unhelpful and even uninterested. After a long while and some comical efforts, the screen finally lights up. ‘Now you can watch whatever you like’, his aunt says brightly. After the adults leave the room, the kid turns off the screen and continues checking his smartphone. Kids don’t watch television anymore, but not all adults are aware of that.

Troch doesn’t take sides. The parents make mistakes, and one of them is absolutely deranged, but the kids’ behaviour is sometimes shockingly repulsive as well. The mutual miscommunication leads to a dramatic event, the consequences of which dominate the second half of the film.

Everything is filmed in a no-nonsense straightforward documentary style. No cinematographic sophistication here, it’s all filmed as it happens in real life. Some scenes are even filmed by the kids themselves, with their smartphones of course. Troch has chosen for a boxed screen in a 4:3 aspect ratio, maybe to accentuate the authenticity of it all. The same goes for the sound, which is so authentic that the dialogue is mostly unintelligible. Subtitles are needed to know what is being said.

This is a film in the tradition of Larry Clark’s ‘Kids’, but it has also similarities to Lynne Ramsay’s ‘We need to talk about Kevin’, which also focuses on the communication gap between parents and children. Because of its raw, unpolished style of filming, the emotional impact of this film is very intense. As I said: parents, beware. 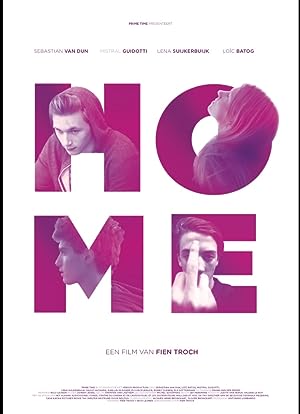 1 review for Home 2016 with English Subtitles