After a decade of living in San Francisco, Jesse is forced to move back to his Midwestern roots because he can no longer afford the city. On his final night in the city, friends and ex-lovers gather for a going away party that promises to heighten Jesse’s already bittersweet feelings about leaving.

I first caught sight of this film in Time Out magazine… where it got good reviews. I was intrigued that Peccadillo Pictures, famous for LGBT film, had teamed up with Naked Sword, a pornography company to produce it.

I’m always reluctant to buy gay film… the majority of the time they bore me and depend on sex and six packs to maintain the viewers interest. ‘I Want Your Love’ was a surprisingly perceptive take on gay life in San Fransisco. The sex was natural and the films part improvisation made it feel like a realistic view into the characters lives. The film made no apology for its approach to explicit gay sex, but interestingly its association with Naked Sword seemed to be kept fairly low key on the film’s cover. It was obvious that the film wanted to be taken seriously.

However, despite the film trying to deliver it failed to maintain my interest. The characters aren’t that interesting to watch and their lives are fairly mundane. It affirms my thoughts about films that contain explicit sex. Sex generally replaces more subtle, interesting and intelligent portrayals of emotion that help us to connect with a character. Therefore sex, unless used well, acts as more of a distraction from what the film is actually about.

If you’re looking for serious gay cinema learn from some of the most successful gay films ever made and avoid explicit content. 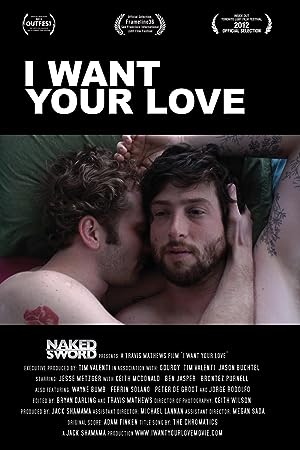 I Want Your Love (2012)
71 min|Drama, Romance|01 May 2013
4.8Rating: 4.8 / 10 from 1,103 users
Jesse and Brenden playfully negotiate their way toward having sex together, for the first time, on Metzger's last night in San Francisco before he returns to the Midwest.
Director: Travis Mathews
Creator: Travis Mathews
Actors: Jesse Metzger, Brontez Purnell, Ben Jasper, Keith McDonald