Julien Janvier lost his mother young, drifted apart from his working class father and ever closer to confident Sophie Kowalsky, the Polish class outsider. Their dares game, symbolized by an interchanged music-box, grows ever bolder, regardless of harm to others and each-other. In his college years, it even suspends their relationship and toys with their marriages, but they are drawn back to each-other irresistibly.

It’s funny how when it comes to french movies, french people are just so harsh (i’m refering to previous comments about this movie and others)!

This one starts really (i mean really) good and, it’s true, goes through worse scenes … but the end … well I loved it! It sure can be accused to mimic american movies (just listen to the music and the “passing-above” camera moves) but shortly after it really turns … well … “french”. But it’s not a bad thing in my opinion. Talking about the characters, You just can’t help thinking “what’s with them ?”, why are they acting like they do ? I like to think it’s because of a tradition in french cinema. Characters have to be twisted and torn apart because of their deep feelings.

In the sequence of events, it can be perceived as seemingly weird … and I have no answer to that … Yet I appreciated it quite much and I’m looking forward to watching the next Samuell’s piece. I rated it 9 out of 10. And i can only tell: watch it! 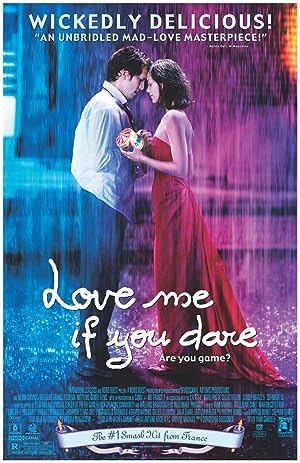 Love Me If You Dare (2003)
93 min|Comedy, Drama, Romance|28 May 2004
7.7Rating: 7.7 / 10 from 63,190 users
As adults, best friends Julien and Sophie continue the odd game they started as children — a fearless competition to outdo one another with daring and outrageous stunts. While they often act out to relieve one another's pain, their game might be a way to avoid the fact that they are truly meant for one another.
Director: Yann Samuell
Creator: Yann Samuell
Actors: Guillaume Canet, Marion Cotillard, Thibault Verhaeghe, Joséphine Lebas-Joly