Land of storm 2014 with English Subtitles

Best friends Szabolcs and Bernard are playing in the same German football team. After a lost game, Szabolcs decides to go home to Hungary where he meets another boy, Áron with whom they become lovers but soon Bernard comes after his friend.

Szabolcs (András Sütö) plays in a German football team, as does Bernard (Sebastian Urzendowsky). A lost match and an ugly confrontation leads Szabolcs to reconsider his life. He goes back to Hungary for simplicity & to build up an inherited broke down house and to bask in his newly found solitude. He meets Aron, a local who welcomes him by stealing his motorcycle. In a odd turn of events, Szabolc hires Aron (Ádám Varga) to help him rebuild his property. A mutual attraction develops to the detriment of Szabolcs, as Aron’s mother and local mates disapprove of their relationship. Violence ensues for both. A sexual friendship of the same sex attraction breeds contempt with the towns people, as Aron’s dependent mother denounces her son’s lifestyle to the local bullies in an attempt to “correct” his behavior. A confused yet curious Aron expresses his affection for Szabolc with a mix bag of emotions and several eruptive confrontations that will ultimately lead to a very shocking and disturbing finale.

This Hungarian/German co-production may very well be reflective, and a testament of the the state of affairs and societal hostilities that still remain in place in a few rural towns within eastern Europe where the enabling, persecution & disdain for same sex couples seems to remain latent. This mentality shepherded by religious intolerance is what leads the violence and the hostile living conditions for anyone not subscribed to the few who have self appointed themselves as the enforcers of the town’s moral code of conduct.

Hungarian director Adam Csaczi’s unveiling of the story with its sweeping cinematography, superb direction and acting is poetic, lyrical and subtly mesmerizing. 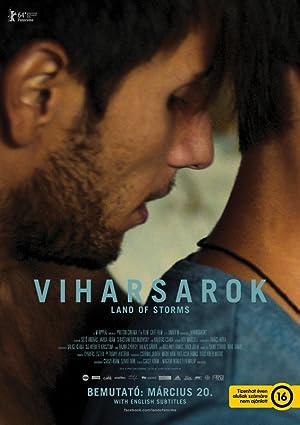 Land of Storms (2014)
105 min|Drama, Romance, Sport|20 Mar 2014
6.7Rating: 6.7 / 10 from 2,928 users
Szabolcs quits football against his father's will and returns to his country in Hungary to take charge of an inheritance from his grandfather. There, he meets Aron and they both explore their identities.
Director: Ádám Császi
Creator: Iván Szabó (screenplay), Ádám Császi (screenplay)
Actors: András Sütö, Ádám Varga, Sebastian Urzendowsky, Enikö Börcsök