When the owner of the Minnesota Twins dies suddenly, his will bequeaths the team to his grandson Billy, a devotee of baseball who, although only 12, has devoured voluminous lore, knows the team intimately, and has shown an uncanny sixth sense of what they need to improve. They hate their manager, so Billy quickly fires the SOB, winning their instant approval. However, this turns to dismay when he announces their new manager: Billy Heywood. How will Billy convince a gang of proud, tough men to stick around and take orders from a kid? On the other hand, what’s to lose– the team has nowhere to go but up.

I thought this was a perfectly nice family film and almost canned it after the first 15 minutes, but I was glad I didn’t because it turned to be a good movie.

The first 15 minutes including two GDs by Dennis Farina and some uncalled-for vulgarity by Jason Robards, but everything settled down after those two exited the film soon after and it wound up being a “cute” baseball movie and very impressive in its realism.

The last comment about “realism” was the most impressive aspect of the film to me. I had grown up seeing every baseball movie and never seeing any actors who knew what they were doing until Kevin Costner came along with his “Field Of Dreams” (and later with “For Love Of The Game”). So I appreciate the more modern-era of movie-making where at least we see actors who can throw and hit. This movie is about as close to seeing real baseball as you’re going to get: very realistic diamond action.

The story was outlandish – an 11-year-old managing a Major League baseball team, but the baseball was so good and a good mix of comedy and drama made it turn out to be a satisfying film to watch. There are some nice shots of Fenway Park and Yankee Stadium in here, too.

Luke Edwards, as the kid, was just fine and a kid you could root for, not a wise- guy. He was aided by adults John Ashton and Timothy Busfeld. This is a nicer role for Ashton (“Midnight Run”) and Busfeld, couldn’t have played a more likable ballplayer. He was great to watch.

This a good film for adults, not just kids, and especially if you enjoy baseball. 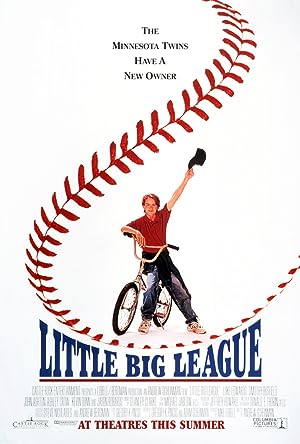 Be the first to review “Little Big League 1994” Cancel reply