Gary who has just married Samantha the woman of his dreams, discovers that her six-year-old son may be the Antichrist.

I wouldn’t have watched this if I hadn’t loved “Tucker & Dale vs Evil” by Eli Craig, which like “Little Evil” is a parody of a horror sub-genre. Unfortunately this film is entertaining enough that I was never bored, but it lacked the creativity and fast- paced humour a premise like this should have.

It begins promisingly with a lot of funny jokes, but after the first 15 minutes, the jokes kind of take a backseat to the exposition, and the humour becomes less crafted, and more akin to an Apatow joint. Adam Scott is great as usual, and though I expected his sidekick Al to be incredibly annoying, Bridget Everett was having so much fun I warmed to her after a while, Clancy Brown is also good. The rest of the cast is pretty average, Kate from LOST phones it in, and Turk from SCRUBS is distracting, as he’s cast as one of the 3 useless comic relief step-dad friends that never have an impact on the story. The kid that played Lucas was also really awful, even by the standards of child actors. Why didn’t anyone give this kid better directions. Nothing he or any of the other child actors said or did were well-done at all.

The direction was much better than any modern Apatow-esque comedy. Craig used a lot of horror conventions to his advantage and I wish the script he wrote paralleled his direction, even if the cinematography still looks like a cheap Netflix film. He does however, use identical speed-cutting transitions to Edgar Wright that is incredibly distracting, like with the same sound effects and pacing and everything.

The structure was not great, it lumbered in parts and then sped through the climax at an insane rate. The film also stops several times and repeats aspects, like expositional scenes.

I wish this were as strong as “Tucker & Dale” which I strongly recommend, yet “Little Evil” lacked a great supporting cast, or any innovative way to spin the subject matter. Instead, it’s just a funnier version of the Omen, which was already kinda funny to begin with. 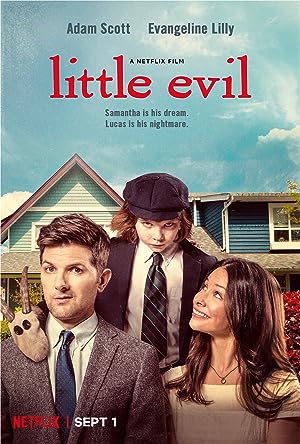 Be the first to review “Little Evil 2017” Cancel reply