Madame Rosa lives in a sixth-floor walkup in the Pigalle; she’s a retired prostitute, Jewish and an Auschwitz survivor, a foster mom to children of other prostitutes. Momo is the oldest and her favorite, an Algerian lad whom she raises as a Muslim. He asks about his parents; she answers evasively. As she ages and takes fewer children, Momo must do more for her; as money is tight, he tries to earn pennies on the street with a puppet. He’s a beautiful man-child, and Madame Rosa makes him promise never to sell himself or become a pimp. A film editor, Nadine, befriends him, and his father appears as well. Madame Rosa reaches her last days in fear of hospitals, and Momo must act.

It’s a shame that this film doesn’t have a wider audience here in the US. Simone Signoret gives perhaps the finest performance of a distinguished career, unafraid to let the ravages of time and hard living show.

The film has some surface similarities to Central Station in that both films are about older women finding new meaning when having to care for a child, street urchins in each film. Both women are embittered and angry at life in general.

Rent Madam Rosa if you can find it. Anyone who loves exceptional film will be happy they gave this one their time. 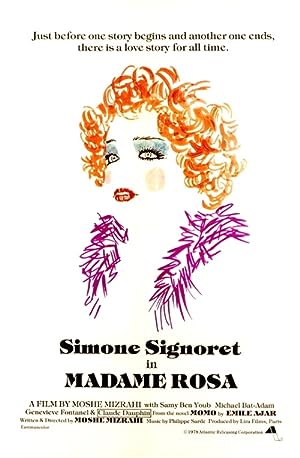