Love and Sebastian meet by coincidence in the street in the Swedish summer night. They happen to share the same secret, but their encounter will have severe consequences for the both of them. An innocent flirtation soon turns into a dangerous liaison.

My name is Love is a short film that was part of a collection of short films with a similar theme under the title “Protect me from what I want” Created by David Fardmar, the set up of how the story is told is quite clever. The main character aptly called “Love” is played by Adam Lundgren. On a night out, partying with his friends, but flashbacks show that this is a good time that goes bad, in more ways than one. Unable to find the courage to seek someone himself, Love gets sought out by Marcus, played by Jonas Rimeika.

This short film has twists and turns, the tension between the characters is believable. For example when Love hesitates to tell Marcus his name, and when Marcus finds out his secret, the viewer can’t help but feel Love’s embarrassment. It raises good topics without taking sides. The ending’s quite shocking though, some people who are easily upset may watch scenes through their fingers. This is one of those films in which the ending is left open, but because of the high level of acting, the viewer may care about the characters and could want to know what happens next. 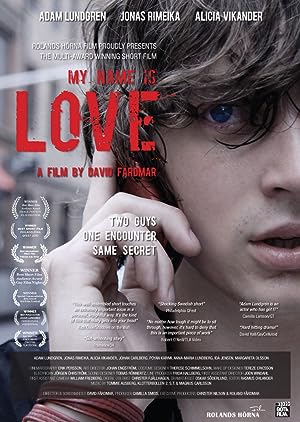 My Name Is Love (2008)
20 min|Short, Drama, Romance|21 Apr 2010
5.1Rating: 5.1 / 10 from 498 users
Love and Sebastian meet by coincidence in the street in the Swedish summer night. They happen to share the same secret, but their encounter will have severe consequences for the both of …
Director: David Färdmar
Creator: David Färdmar
Actors: Adam Lundgren, Jonas Rimeika, Alicia Vikander, Johan Carlberg