In a suburb populated by wealthy and liberal parents who want a bucolic life for themselves and their children, Wendy, Billie and Ann are seniors at the alternative private school; they spend all their time with fellow students John, Price and Robert. The six have been friends since elementary school and their friendship has become a six-person monogamous relationship. They swap sex partners each week; their loyalty is to the group, not to one person. The six friends don’t want to survive high school – they want to transcend its pettiness. Their

friendships are intense, especially between Billie and Wendy. After orientation, Wendy meets Sean, a new senior who moved from Chicago; he finds out about her “inner geek” and she quickly recognizes a kindred spirit. Soon their friendship becomes romantic and Wendy is torn between her genuine affection and desire for Sean, and her commitment and belief in the group. Wendy starts to test the boundaries of her vow to her friends, and Billie realizes that she is going to have to fight to keep her best friend; which shouldn’t be a problem, since each of the teens has collected a box full of mementos from their sexual experience. If Wendy tries to leave, Billie can destroy her reputation and relationship in a heartbeat. While Wendy is trying to decide between Sean and her friends, Wendy’s younger brother Nathan meets Sean’s mother, Helen who is waiting a long three weeks to start a new job. Nathan develops a huge crush on her, and uses his considerable cooking skills to try and woo her. When Billie realizes that Wendy really might leave, she tests her – pushing Wendy to publicly ridicule Ryan, a girl who left the group last year along with her boyfriend, Aaron. Sean witnesses the brutal scene, where Ryan’s past is used against her. Wendy is devastated that she allowed herself to be pushed around by Billie. Then Wendy spends another Saturday night with the group and she is unable to “cheat” on Sean; her hesitation is all that Billie needs to accuse her best friend. After the girls fight, Wendy takes out her frustration on a random couple who keep making out in front of her house. Ryan, hearing that Wendy is out of the group, tries to be friends, but Wendy doesn’t like what Ryan has become – a subservient wet dishrag of a girlfriend. Sean and Wendy try to be a “normal” couple, but the group quickly tests the relationship: Billie puts the box of memorabilia in Sean’s locker. Wendy claims she isn’t scared, she knows that Sean loves her. Maybe so, but when he sees the photos that document a lifetime of sexual experimentation, he is fed up and offers an ultimatum – Wendy can burn the box, leave the group and be a normal girl, or they can break up. Wendy has gone from one ultimatum to another. When Wendy sees Billie being tortured for being alone by other students, she wants to comfort her friend. Billie invites Wendy back to the group; such is the depth of Billie’s love for her. But Wendy makes a braver, and stronger decision – to be alone. The girls in the story – Wendy, Ryan, Billie – all must face the next chapter of their lives alone, and for the first time, at least Wendy sees the possibilities this offers.

As a teenager, myself I defiantly was interested in seeing this movie. It looked as though it would have portrayed an average teenagers life accurate as opposed to the wholesome “teen flicks” out there. I went to this movie with a friend of mine who is also a teenager and we left the movie theater speechless because the movie literally astounded us. Not only was the movie well edited and shot wonderfully, it was also profoundly truthful. Of course, a few of the party scenes were a little outrageous but it is a movie and some things are going to be unrealistic. As an older viewer they may think this movie is a far cry from what there teenage years were like but in a teenage modern society it is more adult and sexual then one might think. Amber Tambyln as well as the other young actors did a marvelous job portraying their characters and the raw emotion that was felt. I recommend this movie to anyone! PS. the soundtrack was amazing as well! 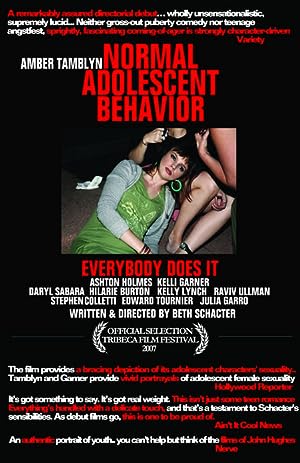 Normal Adolescent Behavior (2007)
93 min|Drama, Romance|27 Apr 2007
5.4Rating: 5.4 / 10 from 2,309 users
Wendy and her friends avoid the heartless world of random hookups and friends-with-benefits by spending all their time together. When she meets Sean, Wendy is torn between her genuine affection and desire for him and her commitment to her friends, especially her best friend Billie: and Billie isn't interested in losing her friends.
Director: Beth Schacter
Creator: Beth Schacter
Actors: Amber Tamblyn, Ashton Holmes, Kelli Garner, Daryl Sabara