Henry Steele is a basketball phenom at his small town high school, but when he matriculates to a big city university on a scholarship, soon realizes that he has few skills outside the sport. Expected by his coach to contribute significantly to the team, Henry is overwhelmed by the demands on his time, the “big business” aspect of college sports, and the fact that he never fully learned to read. Things look bleak for Henry when Janet Hays, a pretty graduate student, is assigned as Henry’s tutor. Her intellect and strength lift Henry out of his doldrums just in time to battle the coach, who attempts to rescind Henry’s scholarship.

What can I remember about “One on One”. I was like 10 years old. I think I saw it as a double-feature with another sports movie called “Take Down”. That is when double-features existed and they usually had movies with similar themes. Anyhow, One on One is a pretty cool movie for anybody, let alone those who love basketball. I remember Robby Benson going to college and he is literally dwarfed by some of the other players. The center was 7’4″, his new friend was like 6’6″ and little Robby is only 5’11”. But he still can dazzle us with his ball handling and great outside shots. He falls in love with a nice Freshman and the relationship is very sweet and tame. I think they may have kissed twice, one being just a simple short kiss. This is your typical underdog story told in a sport’s theme while giving the audience the allure of young adults learning about life and love. The closing song and montage is also nice and reminiscent of the 70’s. 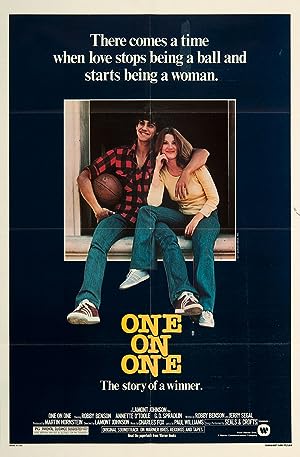 One on One (1977)
98 min|Drama, Sport|17 Feb 1978
6.4Rating: 6.4 / 10 from 1,372 users
Henry Steele is a basketball phenom at his small town high school, but when he matriculates to a big city university on a scholarship, soon realizes that he has few skills outside the sport…
Director: Lamont Johnson
Creator: Robby Benson, Jerry Segal
Actors: Robby Benson, Annette O'Toole, G.D. Spradlin, Gail Strickland