Otto is a handsome, sensitive, neo-Goth zombie with an identity crisis wandering the streets of the city, until one day he auditions for a zombie film…

I just watched this and I should warn all viewers, especially fans of gore, that Otto; or Up with Dead People starts out remarkably slow paced. This film takes it’s time getting started with the plot and it will likely challenge most people to continue watching. It may be too slow for many viewers. However, if you stick with it, you will most definitely be rewarded! This latest film by Canadian filmmaker Bruce LaBruce is fantastic. It’s my second favorite Bruce LaBruce film after The Raspberry Reich. It is always an interesting experience to watch any of his films and this one sure didn’t let me down! Otto is a gay pornographic zombie horror movie. Judging from that description, it should be quite obvious that this isn’t for all tastes. Then again, not all Bruce LaBruce films are! Otto was, in a way, the movie I have always been looking for. I love zombie films, I love horror films, I love gore films, and I love films with gay themes. If you are a fan of all of these genres, this film should satisfy you. It is among one of the more satisfying gay films I have seen for quite some time. The film is scary, it’s gory as hell, and the sex scenes rock.

This movie is just plain fun. It works as a satire and as a horror movie in equal measure. I found it to be hilarious at times. The movie-within-a-movie trick often gets misused and can easily turn a film into a mindless mess a clichés. Otto does not fall into this trap. Instead, this film takes the idea in a unique direction. While the film, by no means, should be taken seriously, there is still a lot to admire in the artistic details of the film. The film is startlingly gory at times. There are scenes that go so far over-the-top in shocking behavior that the film manages to walk that fine line on surrealism and tastelessness. Whether it is either of those is irrelevant because it is hilarious to watch some of these scenes take place.

Politically, the film certainly has something to say. While Bruce LaBruce’s films have always dealt with politics, this film manages to not push that so far as it does play off of that idea. Bruce LaBruce satirizes himself with the German filmmaker, and as a result the film hits the right clever notes. Otto, the zombie, is ridiculously beautiful to look at. The soundtrack is certainly very cool, as most soundtracks to the films of Bruce LaBruce are. Most importantly, the film is alive and it flows with heart. This is truly the work of somebody who loves the conventions of film and the endless possibilities of originality in film-making. Definitely check this one out if it sounds like your kind of film. You especially won’t be disappointed if you’re looking for the next great surrealist picture of the 21st Century. 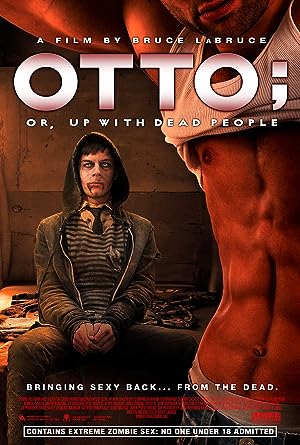