Two boys grow up together in town of Pajala at 60’s. United by rock’n’roll music.

his film is about the relationship between two boys growing up together in a small town in the north of Sweden. Their nickname for the town is “Vittula” (roughly translated: The P*ssy fields).

The movie contains violence, sex, nudity and rough language without having any of those ingredients taking away focus from the actual story. In my opinion, it’s also rare for a movie to successfully combine comedy and drama. Here the two parts are well balanced and will give you both laughter and sadness.

However, the movie have two weak spots.

1. Since I haven’t read the book, I found myself filling in blanks in the story. It isn’t always clear what event follows another. Sometimes it’s almost like a highlight reel of events taking place in no specific order. Maybe this is how the director intended it to be or maybe how the book is written, but this was kind of annoying for me.

2. Some actors change their accent from scene to scene, which of course take away a lot of credibility from their character. If an actor can’t fake a typical northern accent of Swedish for the full lenght of the movie, it would be better if they just stick with their natural accent.

Most people I have spoken to seems to have enjoyed this movie in one way or another, maybe because the story is set so close to home and feels somewhat familiar. (I hope that this movie will be appreciated by people in Finland and in the southern parts of Sweden as well.)

Cast and crew worth to mention are: Director Reza Bagher for taking the initiative to start this project which turned out to be a nice movie (even though some of the scenes don’t fit especially well into the storyline, as I mentioned before). Actors Jarmo Mäkinen, Björn Kjellman and Lennart Jähkel for great acting performances. 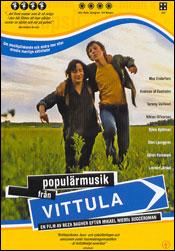