A drama that follows the travails of the Pineda family in the Filipino city of Angeles. Bigamy, unwanted pregnancy, possible incest and bothersome skin irritations are all part of their daily challenges, but the real “star” of the show is an enormous, dilapidated movie theater that doubles as family business and living space. At one time a prestige establishment, the theater now runs porn double bills and serves as a meeting ground for hustlers of every conceivable persuasion. The film captures the sordid, fetid atmosphere, interweaving various family subplots with the comings and goings of customers, thieves and even a runaway goat while enveloping the viewer in a maelstrom of sound, noise and continuous motion.

Even before watching our very own semi-controversial finalist in the Cannes de Festival this year, I knew that I would love Brillante Mendoza’s “Serbis.” Not only because two of my friends are in the production team, but this film strikes a familiar chord in my heart because I know personally the venue and the local color of the story where the story of the film takes place. I grew up in Pampanga and saw many films in majority of the theaters in Pampanga. During the lahar era, my sister and I stayed and lived in our photography studio, which was just beside San Fernando’s best theater then. That time, I was inside that theater almost every day, watching the same film of the week again and again. If that does not conjure much bias for this film, maybe this one will: I personally experienced being almost sexually harassed in the Family Theater, the very same one featured in the film “Serbis.” Now that’s enough neo-realism for you. Hahaha!

I can understand why many people dislike “Serbis”–it’s too raw, uninhibited, and bleak. Foreigners would be turned off by the disgusting display of sexual scenes and the popping of the boil from an actor’s buttocks and the deafening and unrefined sound quality. And Filipinos would also be repulsed by the “lack of story” and the absence of subtitles while the actors freely converse in Kapampangan and Ilocano.

I am lucky enough to have an Ilocano beside me in the theater, translating the Ilocano dialogue. Of course, I was delighted to hear Kapampangan being spoken so lavishly and frequently in the entire course of the story. It felt so much like home to me. The sound and sight of Pampanga in the film are startlingly genuine. I shivered at the sight of familiar places. I marveled at the uncanny natural feel of the setting. The theater is alive.

We witness how the camera leads us to follow the main characters, as it snakes in and out of every room and shamelessly presents to us its ugliness and grittiness. The theater is a character itself–it has its own personality and even moral obligation to the psyche of every single character living or simply loitering in its premises. The members of the audience become part of the story as we spy on the characters’ regrettable lives. The characters hang on to the theater as their refuge to the wretchedness of their own problems. We get to see a thin slice of their lives, from morning to night, which is more than enough to establish the story and make the audience draw out their own inferences as to how the story would, not end, but continue even after the credits start to roll.

That’s probably what many viewers missed after seeing and dissing the movie with raised eyebrows and shoulders. The film managed to make them feel estranged because they are not familiar with such abnormalities or disgusted because the film does not apologize for its harsh depiction of the reality of “serbis” not only inside the film theater but also of the entire local film industry itself. It is quite apparent that the entire film is both homage to and critique on the Philippine cinema.

The most striking realization I had a few minutes after seeing the film is that despite the revolting scenes and appalling images bombarded to the audience in the majority of the screening time, there are also bits of images of optimism for the future of the characters and the theater itself: the walls are being repainted, the head of the family sits in front of the ticketing booth (suggesting taking more control of the cinema), and the troubled son starts his own journey to find himself even against the religious parade and the anonymous throng opposite his direction. In the words of Sam Cooke: A change is gonna come. I hope that Brillante’s brilliant film will also be the impetus of such a thing in the Philippine cinematic history. 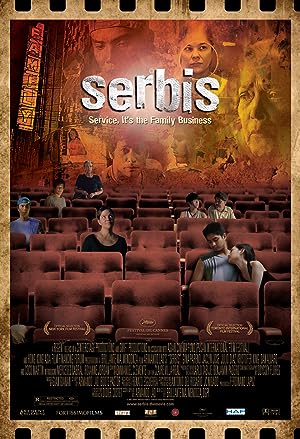 1 review for Serbis 2008 with English Subtitles