Tomxc3xa1s is a successful writer who has spent the last forty years living outside Spain. After the strange death of his wife, he receives an old tarot card, the love card, which has a strong meaning for him due to something that happened in his past. So he returns to the small village in which he was born and raised. He is haunted by memories of the tragic events from the long past. At a young age, he desperately fell in love with a mysterious woman, whom everyone in the district shunned, considering him a witch. She died a painful death during a fire – And now he is haunted by nightmares and visions, from which the blood freezes in his veins and her hair moves on his head. Here and there he sees the ghost of a woman. Overwhelmed by vague suspicions, he decides to go to the place where his beloved’s house once stood

After the suicide of his wife Greta (Elsa Bodem) overseas, the sixty years old Tomxc3xa1s (Jordi Dauder) receives a tarot card and returns to his hometown in Spain. While driving, he recalls through flashbacks his adolescence in the 60’s in a primitive and superstitious village in the countryside. While studying with his friends Carlos (David Arnaiz) and Vicente (Adrixc3xa1n Marxc3xadn), they tell rumors about Moira (Natalia Millxc3xa1n), the lonely newcomer that lives in a house on the hill. In accordance with the beatas of the village, the gorgeous Moira would be a witch that had encounters with the devil during the night. They decide to snoop Moira, and Tomxc3xa1s (Juan Josxc3xa9 Ballesta) stumbles on a root, falls and faints. When he awakes, he is in Moira’s bed, and the woman treated his ankle and washed his clothes. He returns to her house and has an affair with her, and becomes obsessed by Moira. His crush becomes obsession, which associated to his jealousy and the ignorance of the locals, leads Moira to a tragedy.

The underrated “Regreso a Moira” is one of the most beautiful, sensitive, stylish, touching and engaging movies that I have recently seen. The heartbreaking story is developed in a very slow pace disclosing a powerful drama of a man haunted by the remorse of his action in his adolescence. There is no horror in the story, only a psychological drama in the head of an elderly man and trigged after the suicide of his wife. The screenplay, the direction and the performances are awesome, and I was impressed with the beauty of the unknown (in Brazil) Natalia Millxc3xa1n. My vote is nine. 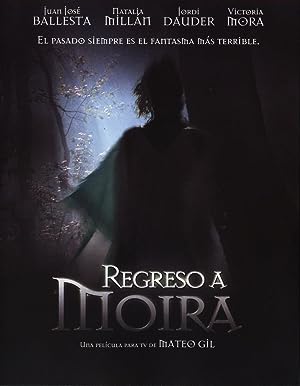 Spectre (2006)
75 min|Drama, Horror, Mystery, Thriller|14 Aug 2006
5.8Rating: 5.8 / 10 from 1,017 users
An elderly writer visits the small village where he grew up and as he walks through he catches a glimpse of the same woman he fell in love with in his youth but she has not aged at all! He follows her, but is not ready for what he finds
Director: Mateo Gil
Creator: Mateo Gil, Igor Legarreta
Actors: Juan Josxc3xa9 Ballesta, Natalia Millxc3xa1n, Jordi Dauder, Victoria Mora