Filmmaker Leo is searching for the wolf in the south of France. During a scouting excursion he is seduced by Marie, a free-spirited and dynamic shepherdess. Nine months later she gives birth to their child. Suffering from post-natal depression and with no faith in Leo, who comes and goes without warning, Marie abandons both of them. Leo finds himself alone, with a baby to care for.

Seen at the Rotterdam Film Festival 2017 (website: iffr.com/en). Unorthodox story with convoluted relationships. The film title gets a double meaning at the very end with an original twist, although the rest of the movie is also a matter of staying alive and well, hence suits the various stories very well. With one female and four male main protagonists, gay relationships can be expected albeit very different from the mostly one-to-one overload we saw in predecessor L’Inconnu du Lac / Stranger by the Lake (2013) by the same director. On the other hand, the relationships in the latter were relatively straightforward (due to the “straight” in it, not the best choice of words, no pun intended). In any case, “Stranger by the Lake” followed standard rules with respect to cruising and making love, contrary to this “Staying vertical” that extends the forming of couples far beyond that. It also shows that gay and straight are not black and white orientations in distinct parts of the relational world, thereby very well demonstrating that people can switch easily between both, and be happy òr unhappy in either circumstance.

Overall it is not clear what it is that these people do tick. Except for the father and daughter couple who herd sheep for a living, no one else seems to have a real purpose in life, nor are they otherwise involved in serious business. The movie opens with a scene where our main protagonist stops his car while spotting a young man on foot along the road, he compliments him about his appearance and asks him whether he might be interested in a screen-test (the usual excuse). The young man flatly refuses and disappears from the scene. When asking around, this young man lives in a house nearby, but does not answer when called, and his father sitting on a bench before the house flatly says that it is no use calling further as contact is not desired. Of course, our main protagonist is not prepared to let go of someone looking so attractive, and returns later for a new attempt.

In the meantime, he parks his car and crosses the landscape with his backpack on the lookout for wolves. He encounters a woman herding sheep, who explains him why wolves are bad news. They chit-chat a bit further, so a new connection seems on the agenda. It becomes more complicated, however, after returning the sheep to their stable later that day. Of course, he is invited for dinner and meets her father. Relationships do not develop along the usual lines, and be aware that more unusual turns of events are to follow. The common borders between hetero/homosexual are to be blurred severely, as are the common demarcations in relationships between generations. All sex is on a consensual basis, albeit some rather out of the ordinary.

All in all, less interesting and informative than 2013-predecessor Stranger By The Lake, yet the unexpected relationships and unorthodox ways to have sex, make this movie a good watch, all that augmented by showing what is involved in herding sheep and keeping wolves away. My 7-score (out of 10) is contradicted by the average festival visitor who awarded this movie a lowly 139th place (out of 172). 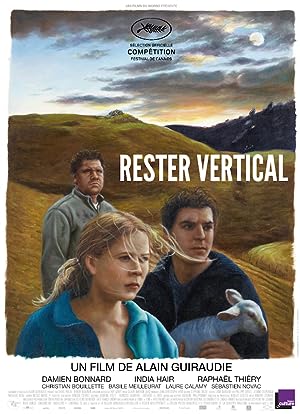