Alex Rider thinks he is a normal school boy, until his uncle is killed. He discovers that his uncle was actually spy on a mission, when he was killed. Alex is recruited by Alan Blunt to continue the mission. He is sent to Cornwall to investigate a new computer system, which Darrius Sayle has created. He plans to give the new computer systems to every school in the country, but Mr. Blunt has other ideas and Alex must find out what it is.

It’s a nice movie, good actors good pace nice dialog that suits the genre well. But I have very big issues with the ending that I find completely unreasonable. I can’t say much more without adding a spoiler, which I’d never do still, I think that in order to deliver a point about what the world of spies is like, Horowitz pushed the ending beyond the borders of likelihood. I think this is a poor excuse, since any movie and especially a movie of this sort depends very much on credible plot. The gadgets may be out of this world the stunts may be sheer madness but the reasoning of characters action must be flawless. As I found the ending to fall short in this very aspect, it left me with a bad taste in my mouth and thats a shame. 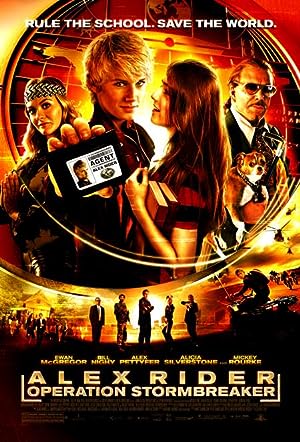 Be the first to review “Stormbreaker 2006” Cancel reply