From the sun-drenched beaches of Australia comes this sexy coming-of-age romance. Cute teen Midget Hollow (Jack Baxter) wanders through life riding big waves and partying with surfer boys. When Midget’s best friend’s gay brother Cass arrives on the scene, the two quickly dive head first into a clandestine sea of sexual awakening. As his lusty romance with the dark-eyed Adonis is soon discovered, Midget has to navigate between his friends’ reaction and his newfound love all while growing up during a hot summer of fun in the sun!

I saw this last week at a gay and lesbian film festival, and quite liked it. It wasn’t what I expected at all. I thought we’d have adorable blonde surfers caressed by the bright Australian sun during carefully timed outdoor shoots. The guys are cute, but mainly because they’re young and do something physical — they’re not preposterously cute. They’re a bit … well, not vacuous, but limited in their interests. There’s no indication that anybody willingly opens a book. The town they live in may have a beach and waves but it’s a dreary little backwater where money is hard to come by and people fall into sex situations for lack of much else to do. The kids may be inexperienced and untutored but they’re not particularly innocent, and the adults don’t seem to be much different from the kids — just various degrees of Older.

The director seems unsure how to go about making a conventional film properly, so he gropes, and ends up making the movie very interestingly. There are establishing shots we don’t need, of things that aren’t important. And somehow the arbitrariness of that echoes the characters’ ennui and drift and cluelessness.

The young people are nice enough, and they have real feelings for one another, but their imaginations are so limited that life seems like a choice between (a.) sticking around and doing some kind of poorly paid labor or (b.) going out and seeing the world — subsisting on various kinds of poorly paid labor. The first place that comes to mind is always Paris, France, and somebody always points out that there are no waves there. Cass, who has traveled the globe, has no stories of doing anything but working in supermarkets. He paints no pictures of his experience. The main advantage the larger world seems to have is that his parents aren’t in it, and it’s away from this nothing town.

The hero Midget (Jack Baxter) is sweet and pretty born loser who shares (platonically and by necessity) a small bed with his slutty mother (we never see her awake, and we only see the back of her head or an occasional hand). He’s illegitimate and doesn’t know who his dad is, and his big escape is smoking grass and/or putting on sound-blocking headphones and blissing out on rock music. (There’s a great scene of a teen party where everybody is dancing to different music through the earbuds of his individual IPOD.) Back from a lengthy exile comes his best friend’s runaway brother Cass — who has fled the shame of being exposed in a homosexual affair with the 30ish local geometry teacher. Knowing that Cass swings that way, and having apparently been attracted to him for years anyway, Midget initiates a secretive affair.

The movie indulges itself in a few kinds of welcome whimsy — Midget’s secret summer job is pretty kinky, and Catholic Cass’s bedroom photo of John Paul II, and his various kitschy holy pictures and statues, carry on an animated conversation in (subtitled) Italian, with some holy figures criticizing the libidinous boys and others defending them. This isn’t the ubiquitous gay coming of age picture. It’s really quite charmingly different, and even its crudities (like the trouble they have racking shots) seem to add to its charm. The sky always seems to be overcast, even on surfing days, and the whole gray atmosphere is all too real and familiar. It would probably be familiar even to a lot of 17 year olds in Paris. 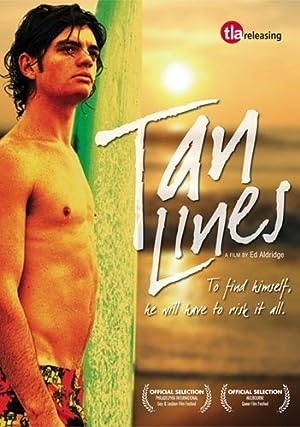 Be the first to review “Tan Lines 2005” Cancel reply