Documentary look at doomed male prostitutes in Prague, ages 15 to 18, who troll at the public swimming pool, the train station, a video arcade, and a disco. After the boys talk about how they got in the game, the camera follows them to the home of Pavel Rousek. Under the name Hans Miller, he makes gay porno videos, primarily for German distribution. Intercut with a movie shoot chez Rousek is an interview that follows him to his day job at a morgue, where he performs an autopsy as he talks about his work. The sex is without protection; the boys are without family. They talk about their bodies and souls, money, their sexual orientation, AIDS, their dreams, and death.

This film consists almost entirely of interviews with boys involved in male prostitution. They are all pretty glum about it and they seem to lack the natural gaiety of youth. Only when they are together in a group do their spirits seem to lift a bit. Pardoxidly, most of the boys do not admit to being homosexual despite their sexual activities. The pornographer has a day job and it appears he makes movies more for the turn-on and any free sex he can wheedle out of boys than the financial rewards. Wiktor Grodecki has made two other films with this subject including Mandragora which is presented as a drama rather than in interview fashion and Angels but not Angels which I have not seen. At this point I am beginning to wonder about his motives in pursuing this subject but if it does anything to aid the boys then it would be a good thing. Life in Prague seems pretty free and easy with plentiful drugs. One of the boys makes what I would consider a rash statement in admitting to enjoying sex with prepubescent boys but this kind of openness about the subject may be what the director is hoping to expose. I thought the classical music score a poor choice and would have preferred music the boys would have been listening to. The overall effect is grimy and the only redeeming value would be to alleviate the plight of these unfortunates. 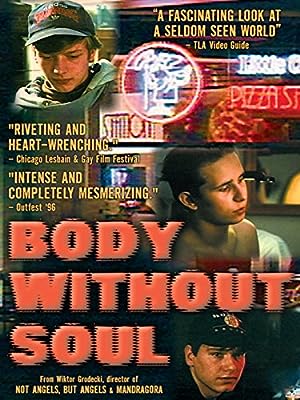 Body Without Soul (1996)
94 min|Documentary|09 Nov 1996
5.6Rating: 5.6 / 10 from 583 users
Documentary look at doomed male prostitutes in Prague, ages 15 to 18, who troll at the public swimming pool, the train station, a video arcade, and a disco. After the boys talk about how …
Director: Wiktor Grodecki
Creator: Wiktor Grodecki
Actors: Pavel Rousek