The 4th Company 2016 with English Subtitles

Zambrano is a juvenile offender that when arrives to the penitentiary only longs to join a football team, Los Perros. Such illusion ends up involving him with the organized crime under the auspices of the authority, because the team is also the 4th Company, a squad of inmates that controls services and privileges in prison, and submits the city to crime, reporting big dividends to men of Power.

Netflix has been steadily releasing original films that are intriguing to say the least. I completely disagree with Steven Spielberg that Netflix shouldn’t be allowed to win an Oscar. He just needs to put in more effort because some these new and hungry directors are making better films than him. That being said this is no Academy Award contender but it is shot, acted, color graded, and conveyed pretty well. It is in Spanish, it is based on a true story, it is about corruption in a prison, but what it isn’t, is most valuable in deciding whether to watch or not.

THIS IS NOT!!!: Blood In, Blood Out Any version of The Longest Yard A movie about football(it barely even shows 5 minutes top of gameplay) A well scripted film A film about one single idea or one single goal or one single enthusiastic protagonist This IS: a film to watch if you love foreign films and Netflix originals interested in prison stories A movie with a cringe-worthy 20 minute ending. 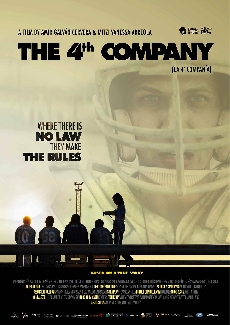 1 review for The 4th Company 2016 with English Subtitles