Home » Non-English with Subtitles » The Club 2015 with English Subtitles

The Club 2015 with English Subtitles

Four catholic priests, now excommunicated, share a secluded house in a small coastal house of Chile where they are are supposed to atone for their sins. Their quiet routine, placed under the supervision of Mother Monica, is disturbed by the coming of a fifth man. The newcomer, a pedophile, appears as a most unwelcome reminder of their own tainted lives…

In a small fishing village 4 men and 1 woman cohabitate in a house. Their greatest joy in life is training and racing a small greyhound they collectively own, and they hold ambitions of buying and training more dogs so they can make more money. But their peaceful existence is broken when a another man comes to join their ranks. He, like the other men, is fallen member of the holy order, and though they are immediately suspicious of him, they put on a brave face. It isn’t long however, before a victim of this new arrival literally shows up on their doorstep, shouting about the ways in which he was victimized and refusing to go away. What happens next shakes the little club to their core and disrupts their pleasant way of life.

This is a movie about some thoroughly unpleasant people. There is no one really to root for. The men and woman seem benign at first, but as they continue to talk they expose themselves for the greedy, selfish, self-interested people they are. While they have been taken out of commission and sequestered in a house, ostensibly to do penance, they have instead carved out a cushy life for themselves, each one privately convinced that they are in actual fact good, and are locked up with a bunch of degenerates.

While the film is beautifully shot, this is a film where the strength lies in the acting and the script. While not visually graphic the film has some very graphic dialogue about the crimes of some of the priests which are about what you would expect given the history of pedophilia in the Catholic church. It’s a slow burn of a movie, but the more you watch the more you will feel disturbed as the members of the club expose themselves for who they really are. 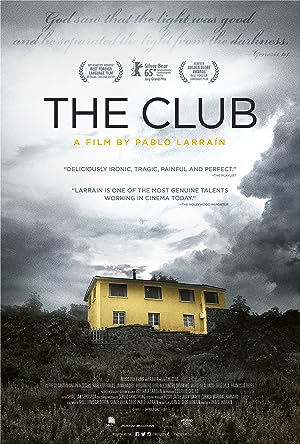