Vietnam War vet Stephen Simmons must deal with a war of a different sort between his son and their friends, and a rival group of children. He also must deal with his own personal and employment problems that have resulted from his Vietnam experiences.

It has been said that Vietnam is America’s most unpopular war, but in light of both popular opinion and critical oversight, the namesake film may just inch Vietnam out of that role.

The title not only refers to the Vietnam War, which has an appropriate albeit very limited place in the film, but it also refers to the literal war that the children continuously wage with one another and the figurative war that rages within each of them…for identity and purpose.

Personally, I don’t feel that “The War” deserves the press it received (or the lack thereof). It is a beautifully crafted film from its intricate, multi-layered story to its moving, realistic performances to its homestyle, nostalgic cinematography.

“The War” combines some of the best elements of “Forrest Gump” and “Fried Green Tomatoes.” It captures the nostalgia of its timeframe, the innocence and naivete of youth, the situational humor of the moment, the consequences one’s decisions and actions bring, and the tragedy of life. It even contains a couple of “musical” period moments.

Its structure harkens very closely to that of “To Kill a Mockingbird” (my favorite film). Both de-emphasize the star talent (Gregory Peck/Kevin Costner), who still performs remarkably and effectively in a supporting role. Both also utilize a (female) narrator who “bookends” the story in a quasi-flashback style, as well as plays a pivotal (if not the starring) role in the story. Each narrator tells the story of her brother and her father: their growth and what has been learned from and about them.

“Sometimes all it takes is a split second to do something you regret the whole rest of your life.” What a great and appropriate theme for a film that few went to see. No wonder so many problems still exist in the world. 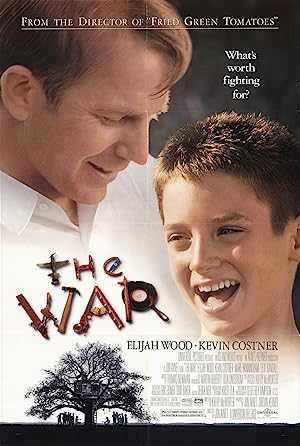 The War (1994)
126 min|Drama|04 Nov 1994
6.7Rating: 6.7 / 10 from 11,275 users
Vietnam War vet Stephen Simmons must deal with a war of a different sort between his son and their friends, and a rival group of children. He also must deal with his own personal and …
Director: Jon Avnet
Creator: Kathy McWorter
Actors: Elijah Wood, Kevin Costner, Mare Winningham, Lexi Randall

Be the first to review “The War 1994” Cancel reply