The Whispering of the Gods 2005 with English Subtitles

Rou returns to the rural seminary farm where he studied as a boy and was molested by priests. Rou has recently had a history of violence, and he brings this anger to the seminary, triggering a series of atrocities within the seemingly peaceful retreat – indeed, much of Whispering consists of sequences of sexual perversion that allow mori to comment on the cycle of abuse and how the distortion of sexuality and spirituality can create hell on earth.

I’ll be honest… I heard this was a hard watch and pretty damn disturbing, and that’s the entire reason to why I watched it in the first place. It was one a few lists of the most shocking Japanese films, but of course I’m a skeptic. Most films that people call sick, shocking or disturbing are lame, it should be obvious by now. But nevertheless, I have an interest to find the film that WILL disturb. “The Whispering of the Gods” shouldn’t be called shocking, but I can agree with disturbing. “Repulsive” is probably the word I feel works best in this case.

It starts out with a priest reading from the bible, only to zoom out to find a kid giving him a handjob. This kid is Rou, our lead character. He lived at a seminary farm when he was younger. The story is set when he gets back to the farm after many years. He escaped from having committed a crime, and went back to the seminary farm to hide. As we find out what crime Rou had committed, it becomes more clear what effect his youth had on him. The years of sexual abuse have come full circle and Rou is now quick to take bizarre actions when things aren’t going his way, and maybe he has some other plans for his return.

It could be considered a slow film, but I wouldn’t say that nothing goes on. If you start watching it, you won’t be looking away. Even though some really repulsive things go on, such as being molested by a priest, the butchering of a pig, a man who wants to lick spit and smell puke, and even some brief animal sex scenes, the film doesn’t rely simply on this. They’re all disgusting things, but never graphic enough for them to be the entire point of the movie. It’s hard to know who you like in this film because at the end of the day most of them seem to be doing some awful things. I actually think the only sane people in this film were the females. If this is something to dwell further on, I don’t know. Could be, but it could be a coincident that they were females.

The film is all about the characters and the psychological aspect of what’s going on. You might think some scenes were too much, but it never comes off as cheap shocks. The film is slow for a reason – we’re getting to know these odd people on a secluded Christian farm. Every character has a reason and an important part of the plot, and I think even the animals do. It was very interesting to see a film that didn’t focus on anything but the story and how to move it along. The Rou character becomes more interesting to watch the further into the film you get. He has a conversation with a priest in the church (and later in his house) that was simply genius.

“The Whispering of the Gods” is a really impressive directorial debut from Tatsushi Ohmori, and I think it might be worth checking out his later work. You need to have some meat on your bones to watch “The Whispering of the Gods”, don’t watch it if you haven’t seen some depraved films before. It’s a good dark drama film worthy of at least a watch, and I hope it won’t just be shrugged off as a “shock film” when it clearly isn’t. 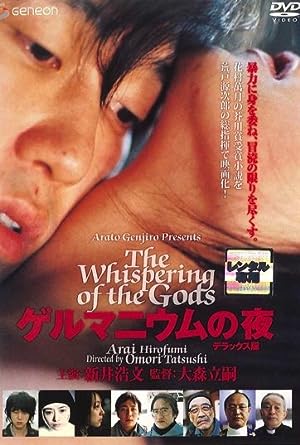 The Whispering of the Gods (2005)
107 min|Drama|08 Apr 2007
6.3Rating: 6.3 / 10 from 119 users
Rou returns to the rural seminary farm where he studied as a boy and was molested by priests. Rou has recently had a history of violence, and he brings this anger to the seminary, …
Director: Tatsushi Ohmori
Creator: Mangetsu Hanamura (novel), Yoshio Urasawa (screenplay)
Actors: Hirofumi Arai, Leona Hirota, Megumi Sawara, Keita Kimura