Take a clichéd Horror-story beginning, a remote Gothic mansion, an insane hostess, a group of strangers (four men, three women and a gorilla) and you pretty much begin to see that this is not meant to be a serious film, but rather a parody of several other (older and better) ones. Social and sexual confusion & misunderstanding guarantees that this odd cast of characters will come together and entertain & amuse.

Three days after watching ‘Thundercrack!’ I still have to convince myself that I didn’t dream the whole thing up. This is quite possibly THE loopiest movie ever made! In its own way as bizarre as anything Warhol, Waters, Jodorowsky, Lynch or Buttgereit have ever come up with. There’s no way I can convey just how weird this is, but it’s a bit like ‘Chelsea Girls’ meets ‘Cat on a Hot Tin Roof’ on acid, with a touch of ‘La Bete’ on the side. Part parody, part porno, part I don’t know what, this movie is way out. Way, waaay out! Highly recommended for fans of strange movies, the campier and trashier the better. ‘Thundercrack!’ almost makes ‘Pink Flamingos’ look mundane… 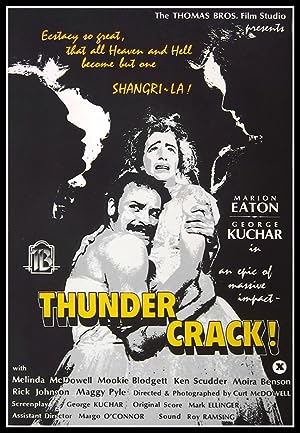