A family moves into a new neighborhood, and a 10-year-old born Laure deliberately presents as a boy named Mickxc3xa4el to the neighborhood children. It is heavily implied that Mickxc3xa4el is a closeted transgender boy. This film follows his experiences with his newfound friends, his potential love interest, Lisa, his younger sister and his parents. It focuses in on the significance of gender identity in social interaction from an early age, the difficulties of being transgender and young, and how Mickxc3xa4el navigates these in the background of childhood play and love.

Laure, the tomboy of the title, moves because of Dad’s job to a new neighbourhood and has to negotiate the minefield of finding new friends. With her short-cropped hair and boyish looks, it is easy for Laure to pass herself off as a boy. So she does. Existing as Mikael, she digs a hole deeper and deeper for herself during summer holidays. With the start of school approaching, friendships made and romances embarked upon, something has to give.

The film works in large part due to the casting. Zoxc3xa9 Hxc3xa9ran as Laure / Mikael is so convincing as a boy that when she does finally don a dress it just looks… wrong. A double for a young Sting, she has an easy charisma and strong expression that makes her every move unmissable. Mikael is befriended by Lisa, a precocious Jeanne Disson, and young love blossoms in bizarre circumstances. As strong as these two performances are, Malonn Lxc3xa9vana Malonn as Laure’s little sister Jeanne steals every scene she is in. Given a secret to keep half-way through, she crackles and delights every time you see her and wonder if she can keep the confidence.

As delightful as the children are, the theme of a young girl yearning to be a boy is presented but hardly explored. The film is episodic, one summer in the life of a mixed up girl. Laure’s reasons for taking things so far are never dealt with beyond surface levels, and no resonance to wider concerns in society are present. The narrative strains with such insubstantial fare, but never breaks. Fans of such coming-of-age tales as Stand By Me or Yamada’s Village of Dreams will enjoy this tale. 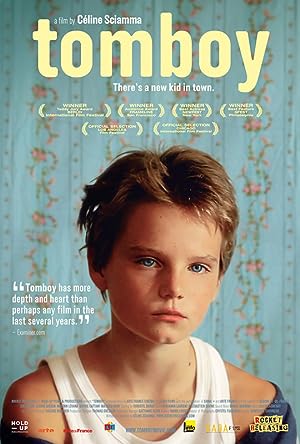