In 1871, Paul Verlaine (1844-1896), an established poet, invites boy genius Arthur Rimbaud (1854-1891) to live with Paul and his young pregnant wife, Mathiltde, in her father’s home in Paris. Rimbaud’s uncouth behavior disrupts the household as well as the insular society of French poets, but Verlaine finds the youth invigorating. Stewed in absinthe and resentment, Verlaine abuses Mathiltde; he and Rimbaud become lovers and abandon her. There are reconciliations and partings with Mathiltde and partings and reconciliations with Rimbaud, until an 1873 incident with a pistol sends one of them to prison. Codas dramatize the poets’ final meeting and last illnesses.

There will be those who watch this film for DiCaprio, which is fine, then there will be those who watch this for the fact that it’s about a French Poet, Rimbaud. The former is most likely the more probable, unfortunately, thus the rating of 5.7 at the time I’m writing this review, 4, September, 2004. Rimbaud was a poet who came to fame early on. Born in 1854, Jean-Nicolas-Arthur Rimbaud was one of four other siblings, a brother and three sisters, however, two of the three sisters passed. By fourteen, he was “winning nearly every academic competition he entered and by fifteen, had his first poem published in a literary review” (Mason, 2003). The police took interest in him as he was a trouble maker.

Some of his more famous writings, “A Season in Hell,” “A Drunken Boat,” and “First Night,” are what he accomplished before giving up on writing at an equally young age, eighteen! Because he was so young, and maintained such excellence, he’s been likened to similar prodigies such as Mozart, and Picasso. His is a work of certain genius which we can peer into – via this short dramatic biography – if we allow ourselves to pay close enough attention. I recommend this movie to any scholar, anyone interested in poetry/writing, anyone interested in prodigies, artists (or their madd, sometimes megalomania temperament), or depressives. Overall, it was good, it sparked remembrances of Robin Williams in “Dead Poet’s Society” (1989), Gwyneth Paltrow in “Sylvia” (2003), and Sean Connery in “Finding Forrester” (2000). All are great writing flicks about love, loss, overcoming the human condition, or being ruined by it. 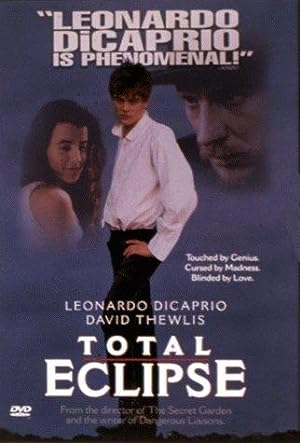 Be the first to review “Total Eclipse 1995” Cancel reply