According to producer David McGillivray, “John Gielgud was obsessed with trousers, loved corduroy and leather. And so he wrote a film set in a menswear shop.” Screenplay was originally penned for the late filmmaker Peter de Rome.

The film they said couldn’t be shown, now (hopefully) free from litigation threats and officially credited as being written by ‘a gentleman’, Trouser Bar made a highly anticipated premiere at the BFI Southbank as part of the Flare festival on March 20th. A bigger audience and bigger buzz than you might normally expect for a 20 minute soft porn film gathered to see fascinating supporting short Encounters (a strange, almost science fictiony softcore gay short from Peter De Rome, who was originally scheduled to shoot Trouser Bar) and a fun Q&A hosted by a very 1970s looking Brian Robinson, and to be thoroughly entertained by the main event.

lthough directed by hardcore filmmaker Kristen Bjorn, Trouser Bar is essentially the baby of producer David McGillivray, and remains old-fashionedly, and very sensibly softcore – in fact, you don’t even see a single unclad penis throughout the film (though there is plenty of bulge-stroking). Given that the film affects a careful 1976 feel, it might be that hardcore sex would be an unsettling lurch back into reality, and this is a film that works best as a deliberately kitsch fantasy, based at a time when British gay men really would have to resort to furtive looks, lingering eye contact and known-only-to-the-likewise signals in order to pick someone up in what was inevitably a risky and furtive world of furtive lust. Here, the eroticism comes from that sense of suggestion rather than the full-on orgy, and so the film works much better by showing restraint.

The 1970s vibe is lovingly recreated with authentic costumes, rather less authentic wigs and, best of all, a spectacular disco pastiche score by Stephen Thrower which had the audience amazed – if there is any decency in the world, this will be slipped out on vinyl, ideally housed in a corduroy sleeve. 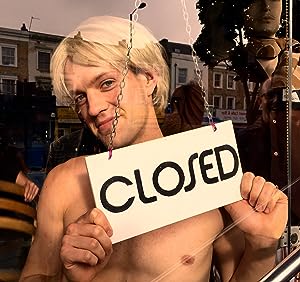 Be the first to review “Trouser Bar 2016” Cancel reply