Home » Non-English with Subtitles » Vanishing Time: A Boy Who Returned 2016 with English Subtitles

Vanishing Time: A Boy Who Returned 2016 with English Subtitles

Five children go to the mountains; magically, one comes back a man.

Vanishing Time: A Boy Who Returned is a South Korean fantasy drama that convinces with an intriguing story mixing fantasy and reality with great acting performances despite a few minor lengths in the middle section. The film has a lot of depth as it deals with the topics of friendship, life and trust in a gripping way. The two main characters are authentic, dynamic and sympathetic and most viewers will care about their fates until the very end. The camera work is accurate and slow, the light techniques add a lot of atmosphere, the Locations are mysterious and original, the soundtrack underlines the movie’s atmospheric parts and even the special effects are gorgeous yet down-to-earth which is a perfect mixture most Asian fantasy movies fail to achieve.

The story revolves around the friendship of two young outsiders that most viewers might identify with because they are both profound, sympathetic and resilient. Su-rin is a teenage girl whose divorced mother died and who has moved to an island with her stepfather. She doesn’t really get a long with her busy stepfather, fails to make new friends and is often seen as weird because of her interest in the occult. She’s a creative, emotional and smart Girl who even develops a secret sign language. Sung-min is a joyful, optimistic and quirky orphan boy who has a crush on the mysterious girl that is so different from all the others. He works very hard to get closer to her and gradually develops an intense friendship and even romantic relationship to the older Girl despite his friends’ negative comments. One day, the young couple and two teenage friends discover a mysterious cave in a forest where they find a shining egg in a hidden lake. When Su-rin returns to the cave to look for a lost hairpin, the three boys break the mysterious egg and provoke a supernatural event that will have immediate, short-term and long-term consequences for everyone involved as well as for their families and the island’s small community. Telling you anything more would take away from the creative plot.

While the event that kicks the story off is a supernatural one, the rest of the story is particularly realistic and has a strong emotional, philosophical and psychological touch. Heart-breaking moments and thoughtful passages meet brief moments of hope and joy. The story remains interesting until the end that some might see as a happy and others as a sad ending which makes it even more interesting depending on your point of view.

Vanishing Time: A Boy Who Returned is a particularly great movie for intellectual teenagers because of the two brilliant main characters but anyone who likes profound dramas or thoughtful fantasy movies should give this clever film a fair chance. Once again, South Korean cinema has managed to create a profound teenage movie that easily beats Hollywood’s current wave of teenage movies around the Hunger Games or Insurgent franchises. 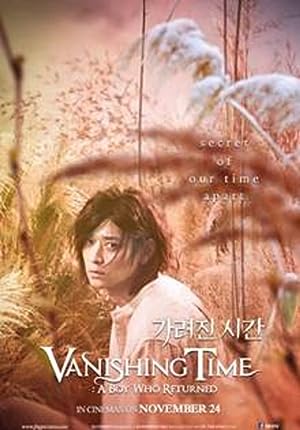 Be the first to review “Vanishing Time: A Boy Who Returned 2016 with English Subtitles” Cancel reply