Harris, a 16 year old boy spends his day skateboarding aimlessly around Athens with his friends. Vassilis, a middle aged cop, is frustrated with his dead-end job and crammed in his small apartment with his family.

Two seemingly unrelated lives in today’s Athens are narrated in Wasted Youth in a span of less than 24 hours. Haris, a 16 year old, spends his time aimlessly on a skateboard while his parents are mostly unaware and indifferent of his whereabouts. He hangs out with friends in Syntagma square, sleeps at a family friend’s house in Kifissia and listens to hip hop music. His failed advances towards his girlfriend do not keep him from finding a new pastime with his friend who works at a photocopy shop. Together, they spend the evening tagging stickers allover the city that say “Wasted Malaka Youth” (Malaka=wanker, jerk).

Meanwhile, Vassilis, a policeman, is exhausted and stressed from his night-shifts while he refuses his friend’s precarious proposal to open a pizza place. Condemned into his suffocating central Athens apartment where he lives with his wife, daughter and mother in- law, he is overwhelmed by tension.

Argyris Papadimitropoulos and Jan Vogel paint a city and country in crisis -which is decisively a moral one- through the story of two individuals. It is a brilliant movie which unlike many Greek movies of the past 30 years, has pace, dialogues that convince and children that actually act! Even though there is a documentary feel to it, the film is very beautifully shot with scenes that vary from a sunset on Philopappou hill to the dark highways of suburbia. Despite the overall pessimistic view of the film, it is loaded with laughter. The wedding scene is reminiscent of Bunuel and Fellini. In a somewhat sacrilegious way, I dare to say that Wasted Youth is the Greek Dolce Vita! 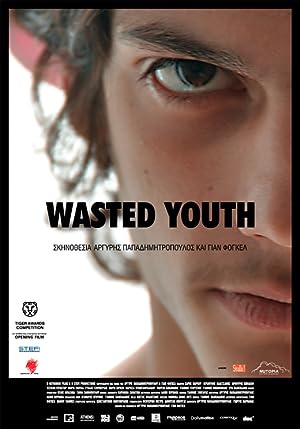 Be the first to review “Wasted Youth 2011” Cancel reply